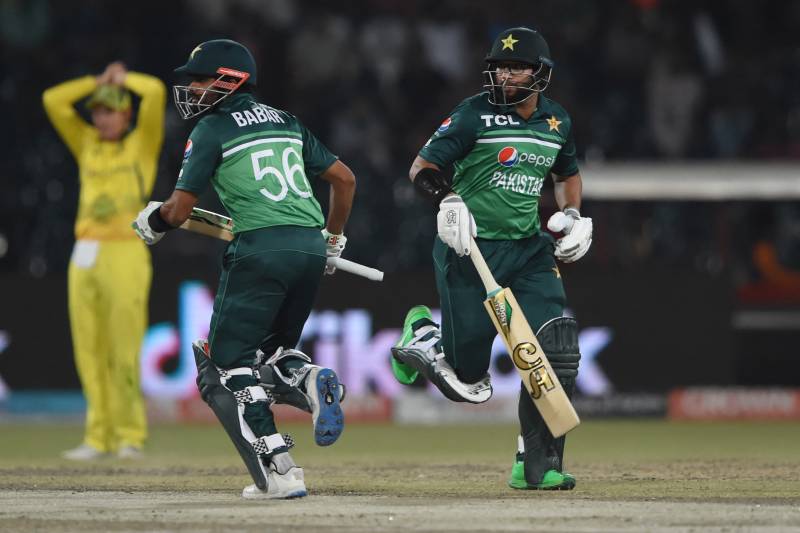 LAHORE – Pakistani hitters put up an excellent show as they slammed Australia in the series-deciding third ODI with a 9 wicket win.

Nathan Ellis first dismissed Fakhar Zaman after the hosts had got off to a decent start in chase of 211 however, Babar Azam slammed a ton while Imam followed the milestone.

Earlier, Pakistan remained in complete control of Australia and restricted the hosts to 210 in the third and final ODI at the Gaddafi Stadium in Lahore on Saturday.

Flamboyant batter and top ODI player Babar for another time starred with a century, while Imam-ul-Haq shone with an unbeaten half-century to power the home side beat Kangaroos in the first one-day international in twenty years.

Men in Green comfortably steered to victory in the 38th over of the last game with nine wickets in hands. Babar and Imam strengthened the Pakistani batting line to a historic victory and stitched an unbeaten 190-runs partnership.

Pakistani skipper remained top-scorer for the side with an unbeaten 105 off 115 balls, laced with 12 boundaries, while Imam remained not-out with his 89 off 100 deliveries including six boundaries and a massive shot.

On the other hand, Kangaroos after being put in to bat first scored 210 before being bowled out in the 42nd over. Finch-led squad was off to a poor start as they lost their first three wickets for a mere six runs.

Travis Head and skipper Finch returned to the pavilion on duck, while Marnus Labuschagne only scored four.

As the openers tumbled, Ben McDermott helped visitors with a 53-runs partnership with Marcus Stoinis. Stoinis and McDermott were both later dismissed before the 16th over.

Alex Carey and the all-rounder Cameron Green then chipped in and added 81 runs for the sixth wicket.  Sean Abbott scored 49 off 40 deliveries as the tail-enders returned soon.

Mohammad Wasim Jr, and Haris Rauf rocked by taking three scalps each, whereas Shaheen Shah Afridi got two wickets. Zahid Mehmood and Iftikhar Ahmed made one scalp each.

Earlier today, Men in Green won the toss and decided to field first against Australia in the third and last One-Day International of three-match series.

Pakistani team pulled off a historic chase after tracking down a mammoth 349, their highest run chase in ODIs in the second fixture.

Pakistan captain Babar Azam and opener Imam-ul-Haq played scintillating knocks to help their side achieve their highest ever run chase in ODI cricket and in the process level the three-match ODI series against Australia in Lahore yesterday.

Earlier on Tuesday, Kangaroos were dominant beating the hosts with 88 runs in the first ODI.