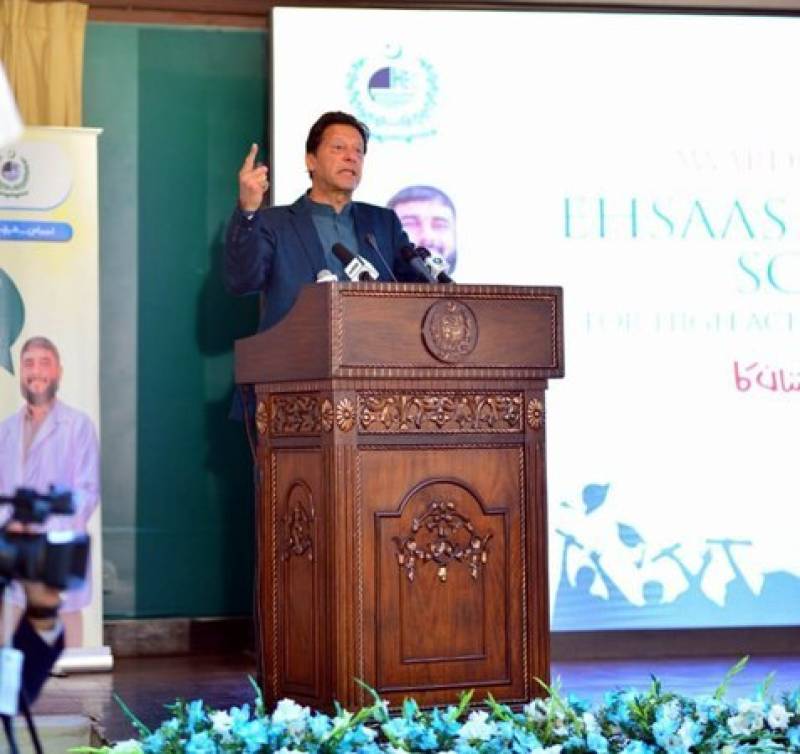 Prime Minister Imran Khan Monday formally launched the Ehsaas Undergraduate Scholarship Programme under which initially 50,000 scholarships would be awarded to the deserving students from the poor segments of the society.

Addressing a scholarship certificates distribution ceremony, he said the present government had taken the responsibility of the weaker and downtrodden segments of society through launch of multiple social security initiatives under the flagship Ehsaas programme.

The prime minister termed the scholarship programme as a giant step towards uplifting the social and economic conditions of the deserving students, with ample opportunities to excel in life and serve the nation and country.

He said in the first phase, a total of 50,000 scholarships would be given among the deserving students from 119 public sector universities.

He said the launch of Ehsaas programme was another milestone in the roadmap towards transforming the country on the pattern of state of Madina.

The prime minister said the state of Madina was the most successful model in the world in which the state, despite having limited financial resources, took the onus to support its weaker and downtrodden sections of the society.

The ceremony was attended by PM’s special assistant on Information and broadcasting Dr Firdous Ashiq Awan, members of the federal cabinet, vice chancellors from different universities and deserving undergraduate students from across the country.

The prime minister urged the students to develop an understanding of the Madina state which gave rise to the most successful civilization in the world as it was based upon the basic humane or compassion for those who had been left behind in the society.

He noted that a civilization was judged not by the way the rich classes lived but it was identified with the conditions of the poor. This was a distinction between a society based upon a humane society and the other one built upon ‘the survival of the fittest’.

“My government has resolved to make them our priority,” he added.

He also regretted that in the country, elite class took advantage of all the facilities including education while for the poor, there was a different schooling system with numerous hurdles.

The prime minister said that Pakistan’s biggest asset was its youth, stressing upon them to take full benefits of the scholarship programme.

He also referred to establishment of NAML University at Mianwali which is affiliated with University of Bradford UK, and said around 75 per cent of the students enrolled there came from the Urdu medium schools.

But despite all of this, about 50 to 55 per cent of the students secured first divisions from the University of Bradford.

“All this proves that these students (from poor families) have an urge and drive to progress in life,” he added.

About other social security and protection initiatives by the Pakistan Tehreek-i-Insaf government, the prime minister said that through distribution of health cards, the underprivileged segments were getting health treatment facilities.

In Punjab, so far health cards had been distributed among six million families whereas, the Khyber Pakhtunkhwa government had decided to extend this facility to all the deserving families.

Besides, through Ehsaas income programme, they were providing the womenfolk in the villages with animals and poultry to bolster their income besides, increasing the protein intakes affecting a major chunk of population in these areas.

About, 1,70,000 youths were being imparted skills development training, he added.

About 170 panahgahs (shelter homes) had been set up, providing decent facilities to the homeless people, he said, adding that their numbers would be enhanced.

He declared that all these initiatives were based upon merit with no political influence involved which was the reason for their success.

According to details, the four-year, Rs 24 billion initiative will support 200,000 students (50% girls) from low-income backgrounds. As part of the Ehsaas scholarships policy, 2% scholarships will be exclusively awarded to students with special needs.

Overall, 50,000 scholarships will be given every year to enhance financial access to higher education for the deserving.

The continuation of scholarship in following years will depend upon the maintenance of academic performance.

The need and merit-based scholarship covers tuition fee as well as a living stipend. The prime objective of Ehsaas scholarships program is to ensure that no eligible student is deprived of higher education because of the financial issues.

Speaking on the occasion, Special Assistant on Poverty Alleviation and Social Safety Sania Nishtar said that the initiative was the biggest ever need based and students focused programme for the undergraduates.

She said that merit, transparency and honesty were the basic ingredients behind this initiative launched under the Ehsaas programme.

Dr Sania said there was a difference between a government which indulged in corruption, plundering the state resources and destroying its institutions largely affecting its downtrodden.

She enumerated that the mechanism and process for implementation of these initiatives was based upon strict adherence to transparency and merit, still she observed that they had to work for bringing more reforms in the institutions.

She said about 50 per cent quota in the scholarship programme was allocated for the female students whereas 2 per cent for the disabled.

The special assistant further informed that in the first phase, process for awarding scholarships for the year 2019-20 had been completed by the Higher Education Commission and the next phase would commence in the upcoming June.

She said a total of 200,000 students would benefit from this programme. A total of over 132,000 students had applied for the scholarships, she added.

During the last 20 years, after establishment of HEC only 29,000 scholarships were awarded when compared to 50,000 scholarships being awarded in one year by this incumbent government, she added.

Dr Sania said the programme was a historic shift in the government’s scholarship policy as in the past, scholarships were given only to students pursuing higher studies.

She further explained that the scholarship programme covered the tuition fee whereas Rs 4,000 would be given to the students as a monthly stipend.

Minister for Federal Education and Professional Training Shafqat Mahmood said that the programme, for the first time, had focused upon undergraduates who would be immensely benefitted.

He said apart from this programme, about 1,70,000 youths were getting high-end skill training including in the latest software technology.

Chairman Higher Education Commission (HEC) Tariq Banuri termed the initiative as a game changer for the deserving undergraduates and emphasized that students from the deprived areas should fully avail this opportunity.