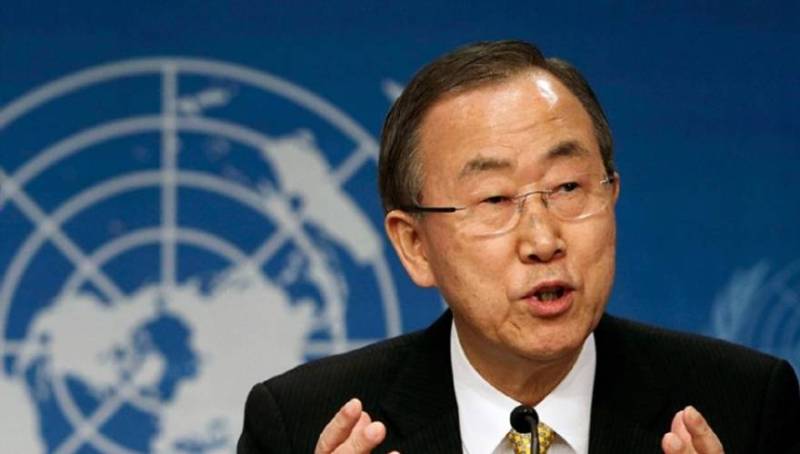 ISLAMABAD - Secretary General Ban Ki Moon has expressed regrets over the fact that UNMOGIP (United Nations Military Observer Group in India and Pakistan) has not been able to fully function due to India’s non-cooperation, adding that the UN’s military mission is only able to operate on the Pakistani controlled side of the LoC as India refuses to accept its functioning on the other side and opposes its expansion.

Briefing Ban Ki Moon on the escalating tensions between India and Pakistan, Pakistan’s Ambassador to the United Nations Dr. Maleeha Lodhi urged him to call on India to cease its aggressive actions against Pakistan and investigate human rights abuses in occupied Kashmir.

He regretted that UNMOGIP was unable 2 fully function in IoK due 2 India’s non-cooperation; conveyed dismay at cancellation of SAARC summit

UN Secretary General Ban ki-Moon called for urgent de-escalation of tensions between India and Pakistan and an end to violence in the region. He said that he was saddened by the loss of life of two Pakistani soldiers and he extended condolences to the Government of Pakistan and the family of the deceased.

Lodhi further said that India has, by its declarations and actions had created conditions that pose an imminent threat to regional and international peace and security.

Lodhi also informed him that Indian claim of carrying out a surgical strike across the Line of Control was false, and India had committed aggression against Pakistan.

She said that India has provoked this crisis to divert international attention away from the indigenous Kashmiri uprising against Indian occupation. It is therefore essential to address the root cause of this crisis and India’s continuing denial of the right of self determination to the Kashmiri people. Lodhi urged him to play a role in bringing an end to the grave human rights violations committed by Indian security forces, ARY news reported.

UNSG repeated his offer of extending his good offices to both countries, which Pakistan has always welcomed but India has consistently declined.

She urged the Secretary General to intervene boldly and unequivocally by calling on India to halt its aggressive actions and provocations, lest these lead to an even more dangerous situation. She said that the SG is duty bound to do so under the UN Charter.

She added that if India did not heed this call, the UN’s relevant mechanisms, including the Security Council, must be advised of this imminent threat to international peace and security, as required under the UN Charter.