Will shut down Islamabad after Muharram: Imran Khan 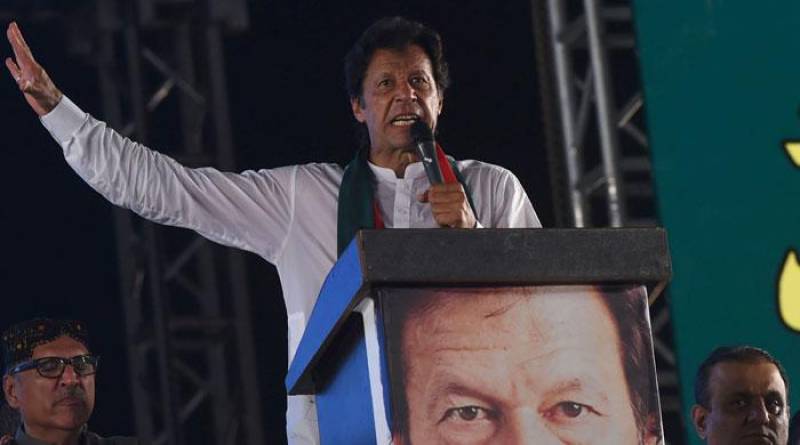 RAIWIND (Web Desk) - Pakistan Tehreek-e-Insaf (PTI) Chairman Imran Khan has said that his party would not let PM Nawaz Sharif govern the country, if he didn't present himself for accountability on Friday.

Addressing the rally at Adda Plot, he stated that his party would shut down the capital after Muharram. Though he has not specified the date for the purpose, but he directed his party men to prepare for the juncture.

"If Pakistan's institutions do not act, we will not let you rule after Muharram," the PTI chairman stated.

"We will shut down Islamabad after Muharram if institutions do not act to hold PM accountable," warned the PTI chief.

Imran Khan said people of Pakistan did not desire war with India, but would give befitting response in event of any aggression imposed on them.

Calling Indian Prmie Minister Narendra Modi an extremist and warmonger, he asked him to give the right of self-determination to Kashmiris.

Imran Khan said that Modi in a meeting with him agreed to solve the issue through talks. He said that there’s no bigger lie than blaming the current situation in Kashmir on Pakistan.

He said that Narendra Modi disappointed the Indian nation.

He said the NAB, FBR, FIA and the Supreme Court should discharge their duties and investigate the matter which, in his words, was an open and shut case.

Imran Khan praised his party men for having got the rally about the mansions of the prime minister on the secure walls of which Rs 600 million of public money had been expended.

Besides, he articulated, an amount of Rs 8.5 billion had been expended on the protection of the ruling family during the past eight years.

In an unconventional style of political demonstration, he showed a presentation, ‘exposing’ the Sharif family of owning offshore properties and how their statements contradicted.

He pointed out that the London High Court had attached the flats of the Sharif family in 2004.  If they were not owned by them at the time, how the London court ordered their attachment, he asked.

Pakistan Tehreek-e-Insaf is holding the march to pressurizing the Prime Minister into coming out clean against allegations over offshore accounts linked to his family named in the Panama Leaks.