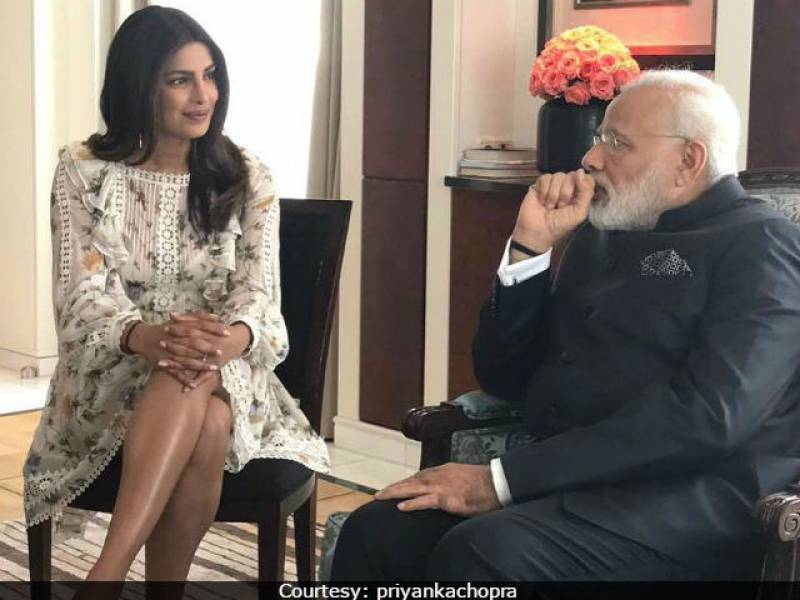 Her decision to wear a dress that showed her legs for a meeting with Indian PM has been criticised by some social media users in India.

Many people attacked Chopra on her various social media accounts for "showing her legs", forgetting "Indian culture", and even sitting cross-legged.

It didn't take long though, before the "disrespectful" dress became the topic of conversation, with many commenting on how it "insulted" Mr Modi and his "pious followers."

Some Facebook users told her off for "disrespecting" the PM"

People from South India - where an insurgency is deteriorating - even criticised Modi for not meeting 'poor' people and 'wasting' time on meeting an actress.

Unfair how Priyanka Chopra deliberately disrespected Modi by wearing that short dress, but at the Met Gala she wore 20 metres of respect.

HOW CAN U WEAR IN FRONT OF PM NO RESPEXT?

PM wears suit with name printed on it

LET HIM WEAR WHAT HE WANT

What kind of dolts are those who attack @priyankachopra for what she wore to the meeting with the PM? Are these chaps brain-dead?

People attacking Priyanka Chopra for wearing skirt have the same mentality of those who keep their woman wrapped in a black cloth.

The unapologetic actress responded by posting a picture of both her mother and her wearing short dresses, captioned "legs for the day".

Chopra chose not to directly respond to people, but instead made what many are calling a "classy comeback" on Instagram, featuring herself, her mother, and of course, legs.

Priyanka is not the first Indian actress to face anger over her choice of attire.

Deepika Padukone once publicly called out a leading Indian newspaper in 2014 for tweeting a picture of her cleavage.

"YES! I am a Woman. I have breasts AND a cleavage! You got a problem!!??" Padukone tweeted to the paper. Many other actresses also came out in support of her.