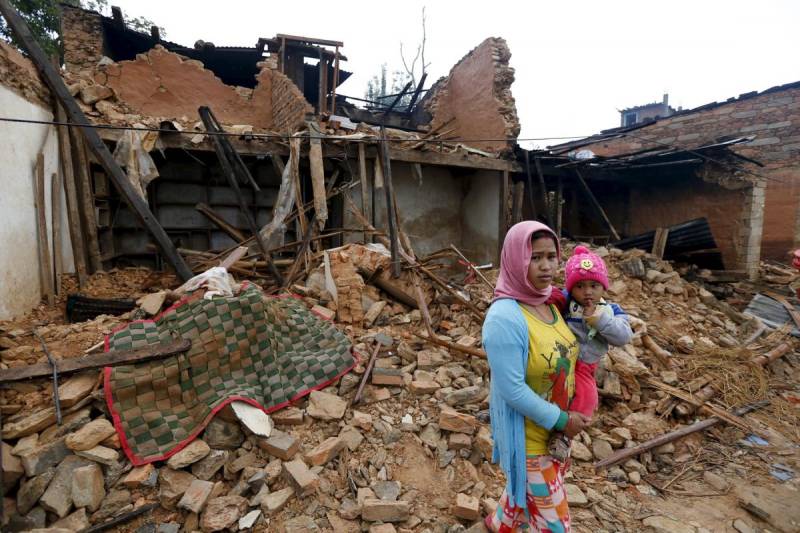 KATHMANDU (Web Desk/Agencies) - The death toll in Nepal's devastating earthquake has topped 6300 with over 14,000 people wounded, officials said on Friday.

The death toll was updated after several wounded people died in hospitals and many dead bodies were pulled out from the quake-hit sites.

Among the dead, the number of women was significant in Kathmandu and outside, police said.

Nepal Army chief General Gaurav Shamsher Rana on Friday told media persons that the death toll could rise to 10,000 as rescue teams were busy in pulling out dead bodies in remote areas as well as in Kathmandu.

At least 50 bodies were recovered from the nine-storeyed Dharahara, or Bhimsen tower, in the heart of capital, that collapsed in the quake last Saturday. There was so much stench coming from the dead bodies that lay under the rubble.

Last week's 7.9-magnitude earthquake was the strongest temblor to have jolted Nepal since 1934, when an 8.1 magnitude quake had left over 17,000 people dead.

Aftershocks, meanwhile, were still shaking the ground even as the country has started limping back to normalcy.

CCTV cameras installed in various parts of Kathmandu have captured the moment of impact of the earthquake.

These videos, released by Nepal Police, show the horror when the earthquake struck at 11.58 a.m on April 25.