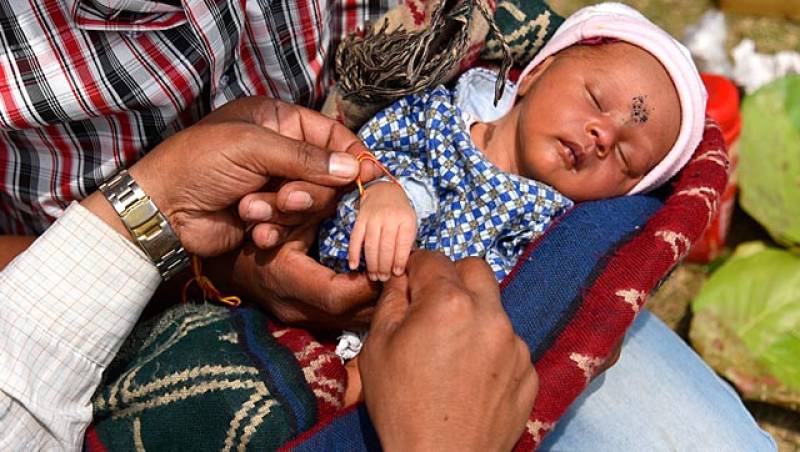 KATHMANDU (Web Desk) - Eleven-day-old Bhupender Karki is not only thriving but also perhaps enjoying his newfound celebrity status at Nepal’s biggest camp for quake survivors. He survived a massive earthquake that pummelled his home and endured the cold nights in squalid campsites.

Under the Nepali custom, the newborn’s naming ceremony was conducted on Friday, the eleventh day after birth, with a priest chanting hymns and putting a black ‘tika’ on the baby boy’s forehead and a red-and-yellow thread around his wrist.

The baby was only four days old when the bone-shaking temblor hit, forcing his parents, a sister and an aunt out of their damaged home in a middleclass neighbourhood in Kathmandu.

Wrapped in a pink blanket, the baby slept through the ceremony. After the rituals, the priest distributed ‘puri’ and banana as ‘prasad’.

“You can call him Ramesh,” the priest told the baby’s parents. The parents had earlier told Hindustan Times they would like a name linking him to the earthquake.

“We have decided to call him Bhupender (king of the earth),” said Bhagwati Karki, the baby’s aunt.

After the ceremony the family sat down for a meal of rice and curry.

At the camp, Ramesh is the centre of attraction for children and women who streamed in through the day to see the baby who is beating the odds of a squalid camp life.

“He was still in hospital. When the earthquake came his cradle started swinging. We picked him up and hid under the staircase,” said Tekbahadur Karki, the baby’s grandfather.

Earlier this week, a five-month-old baby was pulled out alive from rubble 22 hours after the quake.