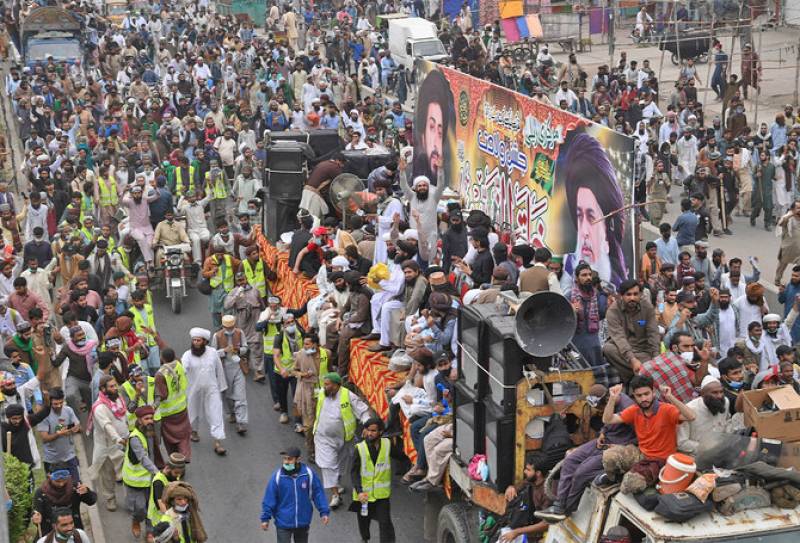 ISLAMABAD -- A large number of supporters of the Tehreek-e-Labbaik Pakistan (TLP) remained camped in Wazirabad on Monday, continuing their protest sit-in for the fourth consecutive day.

On Sunday, the government announced it had signed a peace agreement with the banned group. However, the group said it would not call off its now over a week-long protest until the release of its chief Saad Rizvi who has been in jail since April for inciting violence against the state.

Details of Sunday’s pact were not shared with the public by either side.

“Tehreek-e-Labbaik Pakistan workers on Monday abandoned their long march to Islamabad after the proscribed group’s leadership inked an agreement with the government, but continued their sit-in in Wazirabad for a fourth day,” the Dawn newspaper reported.

On Sunday, the government set up a steering committee led by State Minister for Parliamentary Affairs Ali Mohammad Khan to make a strategy for Rizvi’s release and the removal of the ban on his party.

“This dharna [sit-in] will be called off completely after the release of Saad Rizvi,” Mufti Muneeb-ur-Rehman, TLP’s chief negotiator, told protesters in Wazirabad on Sunday.

The protest would continue in a nearby park in the city “until the government will fulfill at least fifty percent of the demands,” he said.

The outlawed group also announced the reopening of the Grand Trunk Road for traffic from Monday, which it had closed down for four days.