Mayweather vs Pacquiao: Who will be the winner 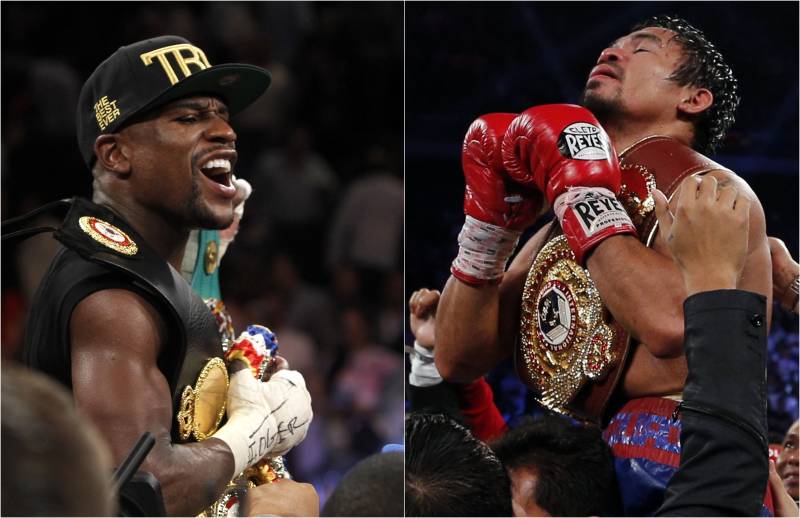 LAS VEGAS (Web Desk/Agencies) - With clocks ticking to the Fight of the Century between Floyd Mayweather and Manny Pacquiao in Las Vegas, Nevada, predictions are running rounds across the world on who will triumph at the MGM Arena Saturday night.

Mayweather is favourite, but at much longer odds than usual, while Pacquiao is in the unusual position of being the underdog. "Few fighters have embodied the nominal title of people's champion more completely than Pacquiao," reports The Guardian.

"So, it turns out Pacquiao is also the people's choice at the sports books. More than three-quarters of the bets placed at MGM Resorts sports books have been for Pacquiao."

The fight is already one of the biggest betting events in the history of Nevada, according to MGM executive Jay Rood.

A Guardian poll of 84 boxing "insiders" found that almost three-quarters (73.8 per cent) expected Mayweather to win on points, and 95 per cent of them expected the fight to go the distance.

Maywaweather has a record of 47:0 with 26 knockouts, while Pacquiao has 57 wins of 62 fights with 38 knockouts.

About this battle, Mayweather says “I always have the remedy to do what I have to do to come out on top. If a fighter lost before, losing is in the back of his mind. For me, all I have done in my career is win, so winning is always in my mind.”

On the other hand, Pacquiao says “I do not get discouraged anymore with a loss in boxing. It is part of the game and I have taken the losses and have made myself a better fighter. I will win May2. ”

Boxing bible The Ring magazine polled 50 experts and 42 of them went for a Mayweather victory. Only six backed Pacquaio, although they included the great Mexican Julio Cesar Chavez.

Legendary British middleweight world champion Nigel Benn had no doubt about his tip, however. "The bottom line is Mayweather beats quality fighters and generally makes it look easy, so I think he finds a way to win this one,"

"Manny will pose Floyd with a few questions early on before Floyd figures things out and starts to edge away on the scorecards. Floyd being taller and with the longer reach and speed will have the right style to win but nevertheless it’s going to be a great fight," he said.

But Pacquiao has support from heavyweights Mike Tyson and George Foreman. Tyson points out that Pacquiao, by throwing more punches than his defensive opponent, could sway the judges. Foreman agrees and tips the Filipino to win "by one round".