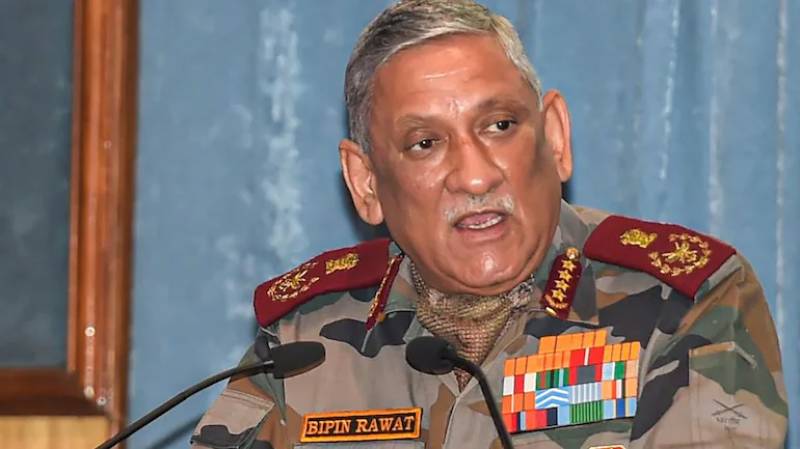 NEW DELHI – The Indian civil and military leadership has once again started blaming Pakistan for a dubious drone attack on an air force station on June 27, even before doing any investigation into the incident.

India’s chief of defence staff General Bipin Rawat has warned that his country will retaliate strongly at a time and place of its choosing if Pakistan attempts to use drones or indulges in `hybrid warfare’ of any kind to target Indian civilian or military assets.

Gen Rawat said that investigative agencies were probing whether the small explosive-laden drones used in the attack on the Jammu air force station on June 27 were launched from Pakistan or from within the region, and whether the intent was to deliver a message of a new capability or actually cause damage on the ground, said Gen Rawat.

Pakistan has categorically rejected the irresponsible and misleading statements by the Indian civil and military leadership after an alleged drone attack on an air forces station in Indian Illegally Occupied Jammu and Kashmir (IIOJK).

Speaking at a webinar here, he said, “We do not yet know the ultimate intention. But let them (Pakistan) attempt to do something to damage our assets, and the reaction from our armed forces will be very different. The political will is there. Our armed forces are ready.”

“A strong message has to be sent that anything of this nature, grey-zone tactics or hybrid warfare, if it damages our assets and affects our national security, we reserve the right to respond at a time and place of our choosing and the manner in which we wish to respond,” he added.

Gen Rawat, referring to the border truce with Pakistan since February, said the mere stopping of cross-border firing on the Line of Control was not enough. “If you (Pakistan) are going to use indirect systems to disrupt harmony and cause damage, it amounts to a violation of the ceasefire.”

Indian Air Chief Marshal R K S Bhadauria said IAF did have a limited number of “soft kill” jammers to disrupt the command-and-control links of small drones and “hard kill” counter-drone systems but they had not been deployed at the Jammu air station because it did not have “critical assets” like fighter jets.

The IAF chief said, "What happened at Jammu was essentially a terrorist act which attempted to target our assets (Mi-17 V5 helicopters) there. The attempt failed. Two explosives, one HE (high explosive) in nature and the other fragmentation, were used.”

ISLAMABAD – Pakistan categorically rejected the irresponsible and misleading statement by Indian Minister of ...