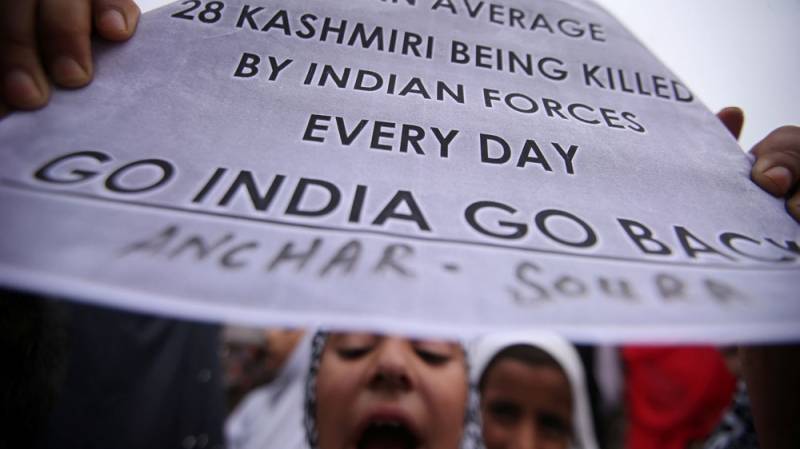 Kashmiri people’s present agitation after the revocation of the special autonomous status of Indian held Kashmir under Article 370/ 35A in Indian Occupied Kashmir (IOK) is a continuation of their historic struggle in their quest to attain the right of self- determination. For decades, Kashmiris peaceful processions chanting demands for freedom and “Kashmir Banay Ga Pakistan” were fired upon by Indian security forces in which thousands of men, women, and children have been killed or wounded. After the revocation of Article 370, which has been rejected unanimously by common Kashmiri and their leadership, Indian security forces have unleashed an unprecedented reign of state terrorism which includes a continuous clampdown on communication, 24/7 curfew & lockdown, tortures, and extra-judicial killings. Numerous international Human rights organizations such Genocide Watch (Genocide Alert, Kashmir India dated 15 Aug 2019), Amnesty international (reports titled Tyranny of lawless Law: detention without charge under J & K public safety act and Losing Sight in Kashmir: a 109-page report on Pallet Gun Victims) and even Indian based civil right activist groups (Imprisoned resistance 5th August and its aftermath) have expressed serious concerns over Indian atrocities and highhandedness and have rejected Indian claim of normalcy in Kashmir. India attempts to divert world attention by alleging Pakistan for cross border terrorism fomenting insurgency in held Kashmir: however, objective reports in international media testify the indigenous character of the Kashmiri Freedom Struggle.

Pakistan upholds the right of the people of Jammu and Kashmir to self-determination in accordance with the resolutions of the United Nations Security Council. These resolutions of 1948 and 1949 demand holding of a free and impartial plebiscite for the determination of the future of the state by the people of Jammu and Kashmir. The Security Council has rejected the Indian contention that the people of Kashmir have exercised their right of self-determination by participating in the "election" which India has from time to time organized in the Occupied Kashmir. The continuous low turnout in a successive election held in the IOJ & K over the year clear repudiates Indian claim.

Soon after the revocation of Article 370 on 5 Aug 19, GOP efforts at the diplomatic level for generating worldwide awareness about the plight of Kashmiris and Indian illegal and unlawful action/ atrocities against Kashmiris are well known and appreciated at all levels. However, what is relatively less known and generally remained out of the media glare are the efforts of the Pakistan Navy to support Kashmiris and augment the country’s efforts through naval diplomacy. Recently, a number of tweets by Hindutva zealots have been circulating in the social media about PN ships highlighting Kashmir issue in Turkey and Africa. The contents of the tweets point to the unease within India as Modi’s government fascist mindset for demographic engineering in held Kashmir stands exposed before the international community which has long been hoodwinked by Indian propaganda of terror narrative.

I had a first-hand experience of witnessing the Pakistan navy’s effort to promote Kashmir’s cause through naval diplomacy, as I had the opportunity to attend a diplomatic reception held at Lagos (Nigeria) onboard a Pakistani navy vessel, PNS MOAWIN on 06 Dec 19. A large number of diplomatic communities including Ambassadors, Defense Attaches, senior officers of Nigerian Armed Forces, prominent members of civil society, and Pakistan diasporas attended the reception. During the reception, recent development in Kashmir was effectively highlighted through banners, brochures, and a short video depicting Indian atrocities in Kashmir. Documentary on Kashmir made a great impact on all the attendees. Mission Cdr during his welcome speech also highlighted the Kashmir issue and Humanitarian crisis in Kashmir. As briefed by mission Commander, similar programs were held on all ports of call during their ongoing round the Africa deployment.

While interacting with ships staff, it was learned that PN flotilla sailed from Karachi in the third week of October and had so far visited Ports of Casablanca (Morocco), Nouakchott (Mauritania), Takoradi (Ghana), Lagos (Nigeria) and ships are also scheduled to make a port call in South Africa, Tanzania, Kenya, and Seychelles. It was also heartening to learn that during all port calls, PN established medical camps where thousands of poor patients were treated and operated as a goodwill gesture to project Pakistan in a positive light and strengthen friendly bilateral ties with African states.

PN efforts as part of naval diplomacy to promote the soft image of the country and project Kashmir issue in the correct perspective have generated a positive impact. Nation indeed feels indebted to the navy for amply highlighting Pakistan’s just stance on Kashmir to garner the support of the world community to force India to restore normalcy in Kashmir and allow Kashmiri’s to exercise their right of self-determination as stipulated in numerous UNSC resolutions.

Arsalan is an IBA graduate and a capital market professional with interest in economy, politics and global financial markets