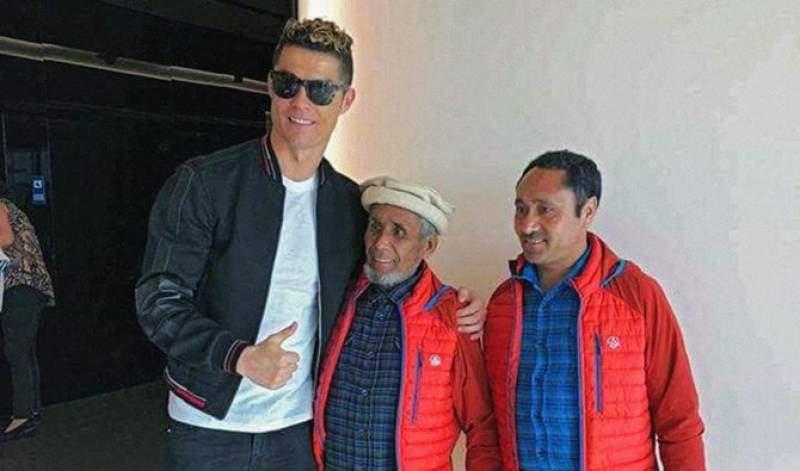 ISLAMABAD – The government of Gilgit-Baltistan has announced it would pay for the medical treatment of world record holder high-altitude climber Mohammad Karim.

The announcement came after Karim's son tried to put his father's Cristiano Ronaldo-signed t-shirt on sale.

Known as "Little Karim," the 71-year-old mountaineer enjoys international fame and holds a world record for climbing the Gasherbrum 2 (8,035m) without supplementary oxygen in 1988.

In the 1970s and 80s, Karim had served as a guide and porter for Western tourists on high altitude expeditions. Three French films have documented his life and career.

Earlier this week, Karim's son, Muhammad Hanif, sought to put on auction a t-shirt gifted to his father by Ronaldo, as the family is struggling to cover his medical expenses that amount to about $70 a month.

“My father has been battling liver diseases since 2016,” Hanif told the media. “His health is deteriorating for the last seven days and now we are unable to pay for his treatment. That’s why we have decided to auction off the shirt signed and gifted by Cristiano Ronaldo."

Karim however told the media later that he would never auction off the shirt gifted by Ronaldo.

Karim met the Portuguese football star during a trip to Spain in 2018.

“I am the king of mountains and Cristiano Ronaldo is the king of football. And my big wish is to meet Ronaldo,” Hanif recalled him as saying during a reception organized by the Spanish government. “To our surprise, the organizers arranged a meeting with Ronaldo the very next day and we met the Portuguese star! Ronaldo gifted my father his signed shirt.”

Soon after a video in which Hanif announced he would auction off the jersey went viral, Gilgit-Baltistan Chief Minister Khalid Khurshid took to social media to say the local government would help.

“Little Karim is suffering from liver diseases and the transplant is not possible due to age," Khurshid said in a tweet on Tuesday. "The government of Gilgit Baltistan will bear all the expenses of the treatment of Little Karim and employment will also be arranged for his children.”

Karim's children have been struggling with employment since the coronavirus pandemic forced the family's climbing school to close.

The chief minister's spokesperson, Imtiaz Ali Taj, said they will soon be employed.

“Government jobs will be given to his sons as soon as possible to help them come out of the financial crisis,” he said.