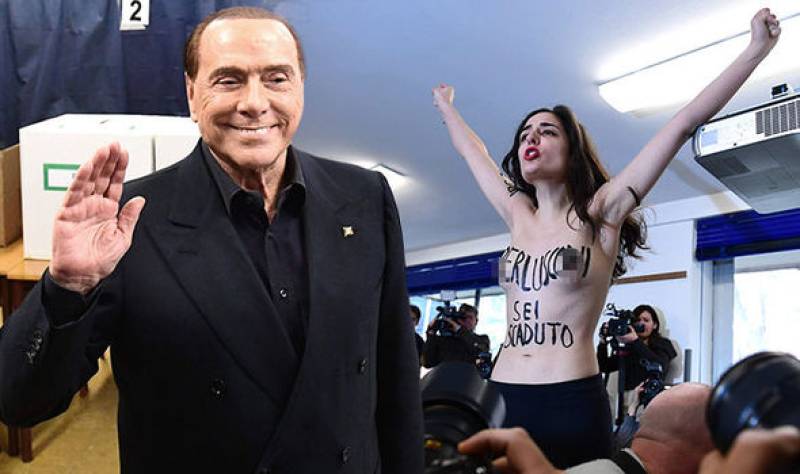 MILAN - A topless Femen protester jumped on the table of a Milan polling station in front of former Italian prime minister Silvio Berlusconi as he was queuing to cast his vote on Sunday.

The woman had "BERLUSCONI SEI SCADUTO" (Berlusconi, You've expired) written on her chest and shouted at the ex-Italian prime minister: "You've passed your expiry date. Your time's up!"

Referencing the "Time's Up" movement against sexual harassment she continued to yell "times up everybody".

After the activist was escorted out by police, Berlusconi cast his ballot and left the polling station.

The four-time prime minister cannot take office himself until 2019 due to a tax fraud conviction.

It's not the first time the 81-year old has been confronted by bare-chested protesters from the movement. The same thing happened in 2013, when three FEMEN activists approached him in a similar way, according to Italian news outlet Rai.

Founded in Ukraine in 2008, the FEMEN movement has become known for its topless public stunts against religious, government and other public institutions. It fled Ukraine in 2013, citing fears for the "lives and freedom" of its members, and has since branched out to a number of other countries, with its main headquarters now located in Paris.