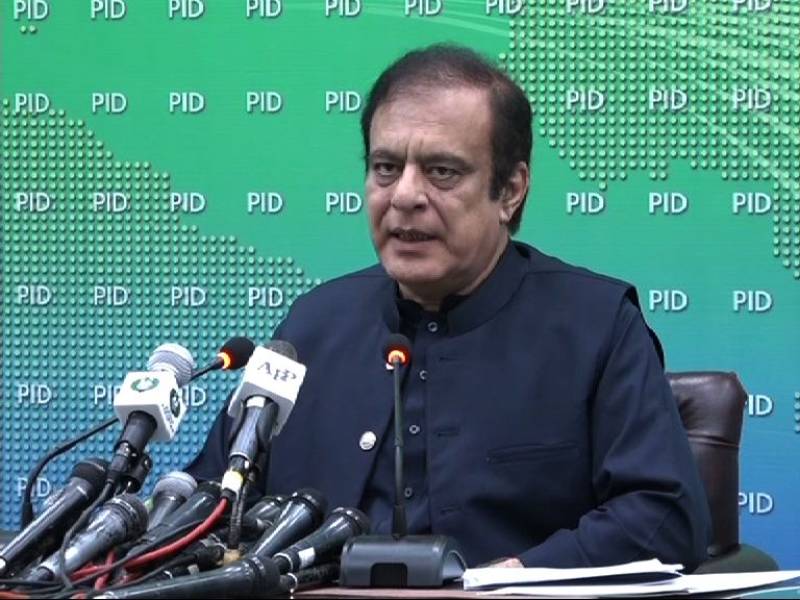 ISLAMABAD - Minister for Information and Broadcasting Senator Shibli Faraz Sunday said the Pakistan Muslim League (PML-N) was responsible for the present economic difficulties of the people as it looted national wealth and paralyzed the institutions for thirty years.

Addressing a press conference here, he said when people put opposition out of power in the elections, it left behind landmines to harm the government of Pakistan Tehreek- e- Insaf (PTI).

When the PTI government came, foreign exchange reserves of no more than six weeks were left and the current account deficit was more than $ 20 billion. The previous government left behind loans of Rs 30 trillion and Rs 2.9 trillion were allocated in the budget for payment of loans.

The minister said Ishaq Dar kept the dollar artificially low by spending $ 23 billion and then he went out of the country in the plane of the then prime minister Shahid Khaqan Abbasi.

The last government could not increase exports in the last five years and it damaged the industry, he added.

When the government led by PTI came, its challenge was to pay back the loans and pay heavily for the imports of palm oil, crude oil, and pulses, the minister said.

He said the PTI government increased the foreign exchange reserves to $ 19 billion and the current account deficit was reduced from $ 20 billion and brought to the positive territory of $ 80 million dollars.

Our exports and remittances increased as people trusted the honest and sincere leadership of Imran Khan and the government met the revenue collection target of Rs one trillion, he explained.

Shibli said the reasons for the hike in petrol prices were international prices which were not under their control.

He said Nawaz Sharif government signed expensive power agreements and his focus was not on renewal energy projects and transmission and power distribution but he relied on expensive fuels like oil and LNG.

The PTI government had to pay capacity payments and circular debt due to previous expensive agreements, he added. The minister said the courtiers of Sharifs were telling lies with confidence and they should not come on television as they were giving a narrative that had no link to reality.

Those who claim to protect a national interest only looted and did nothing for the public, he added.

Shibli said the PTI government was bound by the power agreements of the previous governments which harmed the interests of electricity consumers.

He said the government-held negotiations with power companies to find a solution for capacity payments, adding a patriotic Pakistani could not sign such agreements.

The opposition compromised on the national interest and its leaders became billionaires and acted greedily, he added.

The previous government also bought regasified LNG at a higher rate, he told.

The minister said Prime Minister, Imran Khan recently held a meeting to boost oil and gas exploration whereas the previous government ignored the sector for the sake of commissions.

He said the government improved the economic situation despite the challenge of coronavirus and fared better than other countries whose economies also suffered.

He said the government reduced the budget deficit, curtailed the expenditure, and took steps to increase the revenue.

Shibli said China Pakistan Economic Corridor (CPEC) was a reflection of unwavering friendship between Pakistan and China and the government was committed to complete the CPEC projects.

Opposition with its statements should not harm projects of national importance, he added.

He said the National Accountability Bureau (NAB) went after the opposition which took personal benefit by relaxing rules and regulations and used every opportunity to commit the corruption.

Cases were filed against the opposition because it was involved in corruption, he added.

Shibli said Nawaz Sharif was sitting in apartments worth billions of rupees in London and making speeches to create uncertainty and instability in the country and he did not want the economy to improve.

He said first the opposition opposed the legislation linked to Financial Action Task Force (FATF) and then it formed an alliance to create instability.

He stressed that the opposition would not get “NRO” as Pakistan Tehreek I Insaf (PTI) came into power on the mandate to go after the corrupt.

He asked Nawaz Sharif to tell how he made the assets and how he took away the money abroad.

The opposition was in a closed street after it attacked the institutions, he remarked.

Shibli said people knew that the government led by Imran Khan was honest and sincere. The prime minister was working day and night and had stabilized the economy and the business activity was increasing, he continued.

He said Imran Khan effectively raised the issue of Kashmir whereas Nawaz Sharif did not take the name of Kulbhushan Jadhav and he was blackmailing Pakistan and its institutions.

Nawaz Sharif did not have a smooth working relationship with the army chiefs and judiciary and he was accused of theft and financial crimes, he added.

To a question, he said prices of different commodities had fluctuated due to seasonal factors, adding the government was taking steps to bring down the prices.

The minister said the ordinance of CPEC authority had lapsed and the government would present a bill in the parliament for the authority.

He hoped that the opposition would support the bill.

He said the government was trying to implement the court decision about Nawaz Sharif and delivered the arrest warrants to him through Pakistan High Commission in London. Nawaz was convicted and went to London on bail, he added.

He said the PM in his speech to the United Nations asked the rich countries to give back the wealth looted from the poor countries.

To a question about the political activity of the opposition, he said it was the responsibility of the government to maintain law and order, adding those involved in corruption cases should be put into jail.

The opposition wanted relief on the corruption cases by carrying out political activity, he added.

The minister said the prices of drugs were rationalized to maintain their standard and ensure availability in the market.