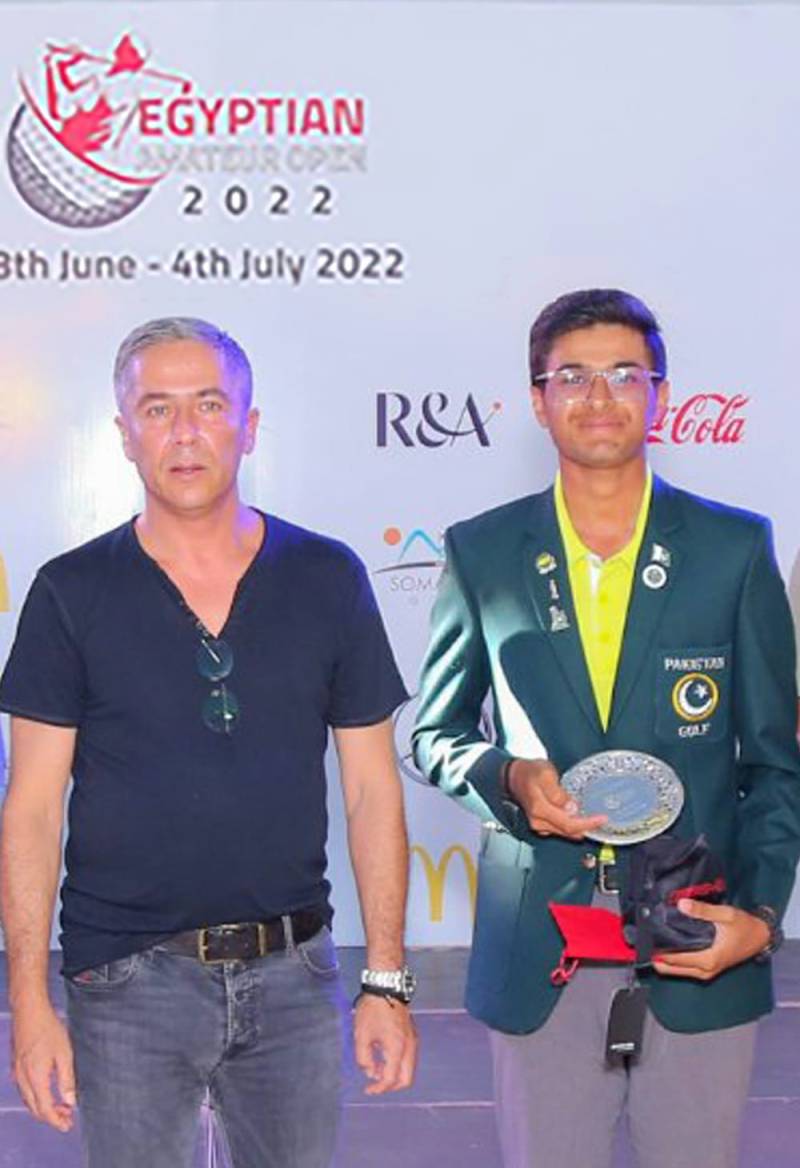 This is one of the oldest amateur open championships, running for the last 101 years. It brings together top players from the Middle East and other countries like France, England and Canada, which are home to hundreds of pro golfers and thousands of Amateur golfers. Their participation made the Championship more

competitive and thrilling. The 4-day intense competition, between 49 players of 18 countries, posed a very challenging environment for all golfers as they were neck to neck in terms of their personal handicaps.

Somabay Golf Club, located on the Red Sea Coast, is known for its strong winds that require a variety of innovative shots to combat the difficulties of its peculiar environment. Pakistan was represented by 17 years old Yashal Khan from KGC Karachi with 1.2 handicap and Umer Khokhar from IGCG Islamabad with handicap

of 1.7. While both the players are ardent golfers who have won many titles at home, this course brought out the best of Yashal Khan who, having mastered the winds of Karachi, found Somabay suited to his style of play.

From Day 1 of the event, Yashal was in the contention for winning the Championship. His score of 74 gave him 6th position in the 1st Round that he maintained till the end. In Round 2, with a score of 75, he was still at 6th position behind the Morrocon, Tunisian and Egyptian players. On Day 3 he played his best round of 70, i.e. 2 under par, and improved his position by 2 places.

The Final Round started with stiff competition between two Moroccan players, a Tunisian golfer and Pakistan’s Yashal Khan fighting for the Trophy. Although Yashal played 6 over in the first 9 holes, he then gathered his fighting spirit to fight back with a score of 38 on the back nine to finish at 5th position. Unfortunately, the other Pakistani golfer, Umer Khokhar, who had posted a respectable score of 75 on Day 1, could not combat the difficult windy conditions and finished tied at 28th position.

Earlier, in May this year, our Humna Amjad, a 17 Years old with handicap 1.2 from Airmen Golf Club Karachi, performed exceptionally well in the Egyptian Ladies Amateur Golf Championship Nefertiti Cup, held in the same Egyptian city. She mastered the difficult weather conditions and applied crafty strategy to win the Runner Up position with a score of 226 in the 3 days event.

This qualified her for participating in the Ladies European Tour and she will participate in a championship to be held in Aramco, Saudi Arabia later this year. Humna Amjad has indeed brought great honor to Pakistan by becoming the first Pakistani lady golfer to qualify for the prestigious European Tour. It is a dream that Humna had harboured for the last many years.

While commenting on this, Dr. Asma Shami, Chairperson Ladies Golf PGF stated, “Humna’s remarkable achievement is due to the vibrantly active environment that prevails in Ladies Golf today. This state has been achieved primarily due to the visionary policies and strategic decisions taken by President PGF, Gen Hillal Hussain, regarding Golf in general and Ladies Golf in particular.”

The outstanding performance of Humna Amjad and Yashal Khan have brought to light, the immense talent present in Pakistan. It is expected that, due to the dynamic leadership of Gen Hillal, the PGF will continue to foster policies that not only encourage the emergence of such players but will also facilitate in their development for enabling them to compete at the International Level.