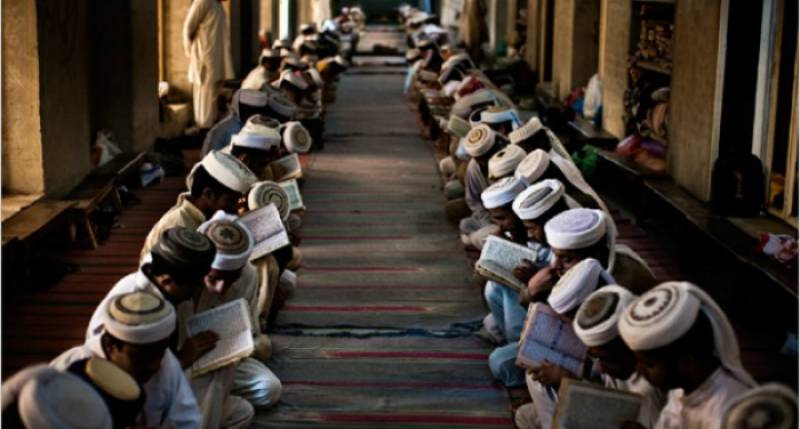 A report presented in the European Union parliament by Brussels-based South Asian Democratic Forum (SADF) has pointed out religious seminaries of Pakistan as a major hindrance in promoting quality education in Pakistan.

The report "Education: South Asia's Foundation for the future", while recommending necessary steps such as a qualitative approach and teacher trainings, proposed "quality knowledge, tolerant views, inclusive citizenship of all religions, ethnicities and...[prevention of] any form of discrimination or fundamentalism."

The report urged the EU, United Nations and other international and national actors to be "diligent and ensure that they do not fund any organisation, instruments or officials that are in any way involved in terrorism or promoting blatant fundamentalist positions". The corresponding section of the report, however, discusses primarily the religious seminaries of Pakistan.

The launching seminar instead of discussing the complex issues that impact education in South Asia chose to attack religious seminaries in Pakistan.

The report said: "In particular, girls in Pakistan and Afghanistan, continue to have lower access to primary education. Regarding primary education, the enrolment rate for girls is 4 percentage points lower than the rate for boys at 84 percent.  At secondary level, the difference widens with 7 percentage points of difference, as the enrolment rate of girls is 68 percent while the one of boys is 75 percent.  The key reasons behind this are the traditional and religious views and the idea that the honour of the girl could be at stake if she attends school or if the school does not have proper sanitary conditions.

Citing Nasir Ahmed, head of National Education Management Information System in Pakistan, the report stated that Pakistan has 24 million out of school students, a poor net enrolment rate and a high dropout rate.

While it highlights hindrances to education, the report believes that Pakistan also made some significant progress "although it still clearly stays behind the regional average."

The report says that Pakistan does not have the necessary infrastructure with 44 percent of the schools not having electricity supply, 34 percent not having drinkable water and 28 percent not having any bathroom facilities at all.  On a security concern front, 30 percent of schools do not have boundaries. As it was shown by the Pakistani Taliban attack on Malala Yusufzai’s, security of girls is a major concern.

After underlining the financial and institutional factors that hamper the betterment of education, the report links the poor state of affairs with 'ideological corruption'.

The report went on to say that "sectarianism and extremism has also been pinned down on religious education, more specifically on Madrassas. Historically, education has been closely linked to religion in every region. Just like in Europe, several religions in South Asia are “go-to” education providers for many children. Madrassas attract low-income families since they usually do not charge fees."

"In fact, according to a recent report, 285 madrassas in Pakistan are receiving funding and support from foreign Islamic countries. Some of these schools have been considered breeding grounds for extremism and sectarian intolerance”

It said that while families facing the conundrum between low standard public schools and unaffordable private schools, there are also a significant number of families who prefer to have their children studying in Madrassas for religious reasons.  "Different madrassas will teach differently and the theological approach and content vary widely. Nonetheless, there is a general fear that the influence of Wahhabism throughout South Asia will dilute moderate interpretations of Islam in South Asia.”

"The religious landscape in South Asia has been changing with the influence of Saudi Arabia since the late 1970s. Through funding of mosques and madrassas, Wahhabism gained growing influence and resulted in “increase in Islamist violence in Pakistan, Indian Kashmir, and Bangladesh”. During the days of the Cold War, this was backed up by the United States who saw a common interest in the fight against the atheist Soviet communist. Later, Pakistani security authorities took advantage of madrassas to influence its neighbourhood, in particular Afghanistan and Indian Kashmir."

Moreover, the report argues, extreme doctrines pouring out of Madrassas do not only influence its students, they also reach mosques and “contribute to spreading a xenophobic worldview”. There is evidence to support that this is already the case in Pakistan: Tariq Rahman’s study shows that intolerance and sectarianism is widely spread in Pakistan both in madrassas and public schools.

While lauding India’s Right of Children to Free and Compulsory Education Act 2009, the report noted that only 41% of the population under the age of 19 was attending public schools. "The caste system is one of the most visible dynamics of exclusion in India and Nepal. In Bangladesh, there is evidence that children from ethnic minorities face discrimination."

The report analysed how India introduced disciplines of Science, English and Social Studies over two decades ago, how just one province in Afghanistan was home to 300 unregulated seminaries and how Bangladesh’s National Education Policy was not adequate to face the challenges of terrorism, religious and ethnic intolerance.

Though imbalanced and loaded against Pakistan, the report does touch upon many issues facing Pakistan, such as terrorism and extremism. Aiming for the future, Pakistan must rethink how negligence benefits and strengthens the hands of its enemies.