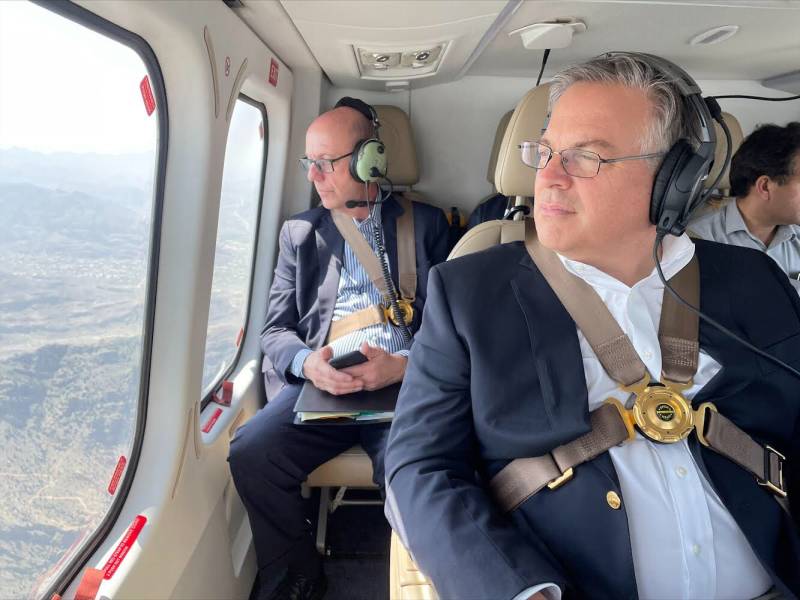 She took to Twitter to vent her anger and branded the envoy a "viceroy in all but name".

"US envoy and his gang flying over sensitive areas of Pakistan on way to Torkham and surveying lay of land + official briefing and red carpet! Areas ordinary Pakistani citizens can't go!

"Blome [is] viceroy in all but name and arrogance writ large? One more US regime change conspiracy agenda item fulfilled!" she tweeted.

Pictures shared by Mazari showed Blome in a helicopter en route to Torkham border and being briefed by security officials.

Later in the day, the former human rights minister responded to pictures being shared of the US envoy with Khyber Pakhtunkhwa Health Minister Taimur Khan Jhagra at a function of the United States Agency for International Development on Thursday for the handover of 36 vehicles to the provincial government.

Mazari said those sharing the pictures did not realise that such government-to-government socioeconomic programmes were done through agreements and were the "norm".

However, she reiterated that an envoy going to "sensitive areas" and being provided access was "a security issue". "So is there a security agreement now in place with [the] US? We should know if there is," Mazari questioned.

Separately, PTI Chairman Imran Khan reiterated his claims of conspiracy, saying that Pakistan was facing fascism in the form of a "cabal of crooks and their handlers brought to power through US regime change conspiracy".

"Will our people bow down before this conspiracy in fear or, as a nation, face up to the challenge?" he asked.