Blast from the past: Old videos of Dr Qadri and PPP trading barbs making rounds again 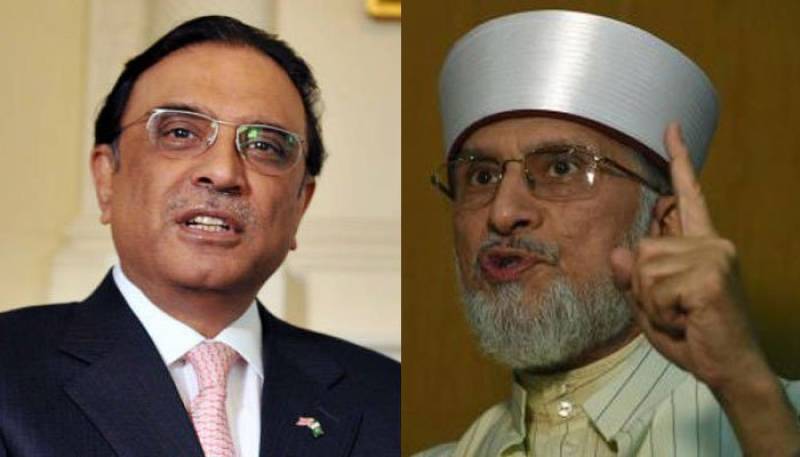 ISLAMABAD - Tehrik-i-Minhajul Quran (TMQ) chief Dr. Tahirul Qadri is very popular for marching on Pakistan’s capital, whenever he finds it ‘necessary’ to shake the government – be it of PML-N or PPP.

Even as both the leaders say they’ve always been on the same page – more specifically about Qadri’s stance on 2014 killings in Lahore’s Model Town - this unexpected alliance also appears unnatural, keeping the past events in mind.

Long before nobody could have imagined the height of police brutality in the heart of Punjab’s capital city, when hundreds of cops opened live fire on PAT protesters near Minhajul Quran Secretariat, Dr. Qadri took a huge rally of thousands of his ultra-devoted followers towards Islamabad.

His anti-government protest sit-in continued for four days and settled amicably after striking a deal with the government.

Tahirul Qadri, who supported a 1999 military coup, had been calling for the military to play a role in the formation of a caretaker administration in the run-up to elections due in May.

The then PPP government agreed with the cleric to dissolve the National Assembly before its term ends in mid-March, giving 90 days until elections are held, according to the "Islamabad Long March Declaration".

The government also agreed that the caretaker administration, which normally precedes elections, would be chosen in consultation with all parties.

A declaration laying out the agreement between the government and Qadri was signed by then prime minister Raja Pervez Ashraf as well as the high-level government officials who made up the negotiating team.

However, people in Pakistan were surprised to see today’s development – an alliance between Dr. Qadri and Asif Zardari - as the cleric is widely known for his past statements against the PPP leader.

Here are two video clips from the past showing the PAT chief and the PPP leadership criticising each other.