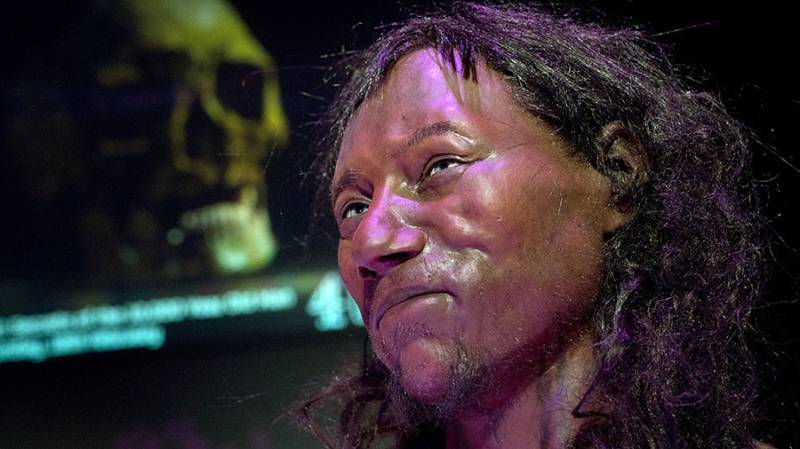 LONDON - The first modern Britons, who lived about 10,000 years ago, had “dark to black” skin, a groundbreaking DNA analysis of Britain’s oldest complete skeleton has revealed.

The fossil, known as 'Cheddar Man' was unearthed more than a century ago in Gough’s Cave in Somerset. Intense speculation has built up around Cheddar Man’s origins and appearance because he lived shortly after the first settlers crossed from continental Europe to Britain at the end of the last ice age. People of white British ancestry alive today are descendants of this population.

It was initially assumed that Cheddar Man had pale skin and fair hair, but his DNA paints a different picture, strongly suggesting he had blue eyes, a very dark brown to black complexion and dark curly hair.

The discovery shows that the genes for lighter skin became widespread in European populations far later than originally thought – and that skin colour was not always a proxy for the geographic origin in the way it is often seen to be today.

“The combination of quite dark skin and blue eyes is something that we don’t imagine is typical, but that was the real appearance of these people, something that’s quite rare today,” said Professor Chris Stringer, research leader in human origins at the Natural History Museum.

Before the Cheddar Man’s lineage, there were around nine colonies of hunters, but it is understood that they were all wiped out by harsh temperatures. The Cheddar Man’s 12,000-man fort, however, thrived in the climate. They lived in tents and hunted boar and deer using hunting dogs, and bows and arrows.

Yoan Diekmann, a computational biologist at University College London and another member of the project’s team, agreed with Booth and called into question the link between Britishness and whiteness.

“The historical perspective that you get just tells you that things change, things are in flux, and what may seem as a cemented truth that people who feel British should have white skin, through time is not at all something that is an immutable truth,” he said.

The Cheddar Man was already known to have been around five foot five inches tall, around 10 stone in weight, with good teeth. He died in his early 20s.

The research is in stark contrast to a previous reconstruction of the Cheddar Man by the University of Manchester in 1998, which thought the British ancestor to be white-skinned. Director of the study, Robert Stoddard, is remarkably reported to have said that the Cheddar Man probably “looked pretty much like any modern inhabitant of a Somerset pub.”

The original model- composed without any access to genetic testing- also pictured the Cheddar Man to have straighter and lighter hair compared to the latest one.

“It may be that we may have to rethink some of our notions of what it is to be British, what we expect a Briton to look like at this time,” Dr Rick Schulting, associate professor of archaeology at Oxford University, told the Daily Mail.

Genetically, the Cheddar Man belonged to the “Western Hunter-Gatherers”, Mesolithic individuals from Spain, Hungary and Luxemburg.

His ancestors, however, are thought to have originated in Africa before moving to the Middle East and then Europe.

The European population has genes which are associated with reduced pigmentation, but the Cheddar Man was found to have “ancestral” versions of the genes, hence the new claim to “dark to black” skin tone.