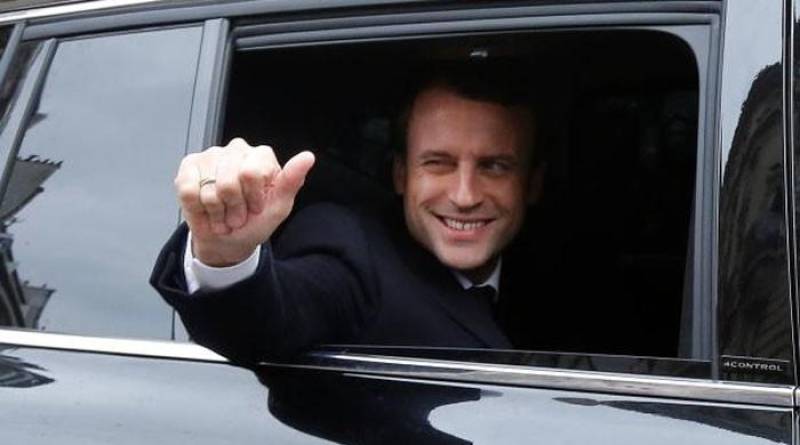 PARIS - Emmanuel Macron was elected president of France on Sunday with a business-friendly vision of European integration, defeating Marine Le Pen, a far-right nationalist who threatened to take France out of the European Union, early projections showed.

Macron, 39, a former economy minister who ran as a “neither left nor right” independent promising to shake up the French political system, took 65.1% to Le Pen’s 34.9%, according to initial projections from early counts, Guardian reported.

“A new chapter in our long history has opened this evening,” Macron said in a statement. “I would like it to be one of hope and of confidence rediscovered.”

Three projections, issued within minutes of polling stations closing at 8 p.m. (2 p.m. ET), showed Macron beating Le Pen by around 65 percent to 35 - a gap wider than the 20 or so percentage points that pre-election surveys had pointed to.

Even so, it was a record performance for the National Front, a party whose anti-immigrant policies until recently made it a pariah in French politics, and underlined the scale of the divisions that he must try to heal.

Le Pen's high-spending, anti-globalisation 'France-first' policies may have unnerved financial markets but they appealed to many poorer members of society against a background of high unemployment, social tensions and security concerns.

According to Guardian, after the Brexit vote and the election of Donald Trump as US president, the race for the Élysée was the latest election to shake up establishment politics by kicking out the figures that stood for the status quo, ejecting the mainstream parties that have dominated French politics for 50 years and leaving the political novice Macron to do battle with the far right.

The 48-year-old's share of the vote was set to be almost twice that won by her father Jean-Marie, the last National Front candidate to qualify for a presidential runoff, who was trounced by Jacques Chirac in 2002.

Macron's immediate challenge will be to secure a majority in next month's parliamentary election for En Marche!