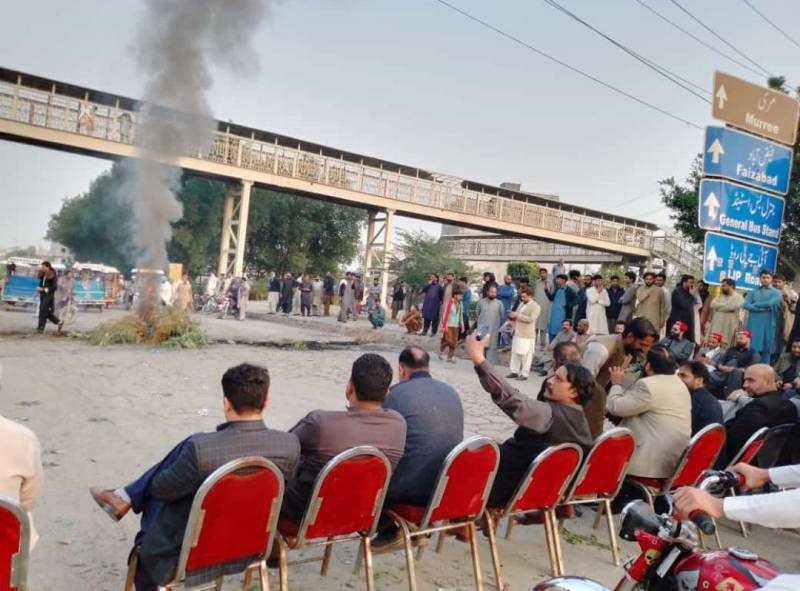 ISLAMABAD – Pakistan Tehreek-e-Insaf (PTI) activists on Monday blocked highways leading from Peshawar and Lahore to the federal capital in protest against the gun attack on ousted prime minister Imran Khan.

Protests erupted after decisions taken at a meeting presided over by PTI leader Amir Kiyani where the senior leadership of the PTI decided to block all entry and exit points to Islamabad for 72 hours from Tuesday, November 8.

The major protest was staged on Murree Road in Rawalpindi. The road leads directly to Islamabad. PTI activists blocked the road by placing chairs and burning tyres. Another set of protests were staged in Shamsabad.

Several groups were staging smaller protests across the city. One protest was being led by PTI leader Fayyazul Hassan Chauhan, while others by by Raja Basharat, Wasiq Qayyum Abbasi and MPA Haji Amjad.

To maintain the law and order and avoid any untoward incident, heavy contingents of police and Rangers had been dispatched to protest scenes. A spokesperson for the police said, “Cases will be registered against the miscreants.”

The decision to block roads was endorsed by Punjab Assembly Deputy Speaker Wasiq Qayyum Abbasi who was leading a PTI protest at Shamsabad. He said the highway will remain closed for all kinds of traffic, except ambulances and other emergency vehicles.

During the protest on Monday, PTI leader and former party spokesperson Fayyazul Hassan Chauhan was leading a rally near Allama Iqbal Park on Murree Road in Rawalpindi. PTI activists torched tyres and blocked the road for all kinds of traffic. Chauhan slapped a party activist over hooliganism during the protest.

During their hours-long protest in Shamsabad, a PTI worker climbed an electricity pylon. He touched the wires and received electric shocks. He was shifted to a nearby hospital in critical condition.

Keeping in view the law and order situation in the twin cities, the education authorities closed schools for two days on November 8 and 9.