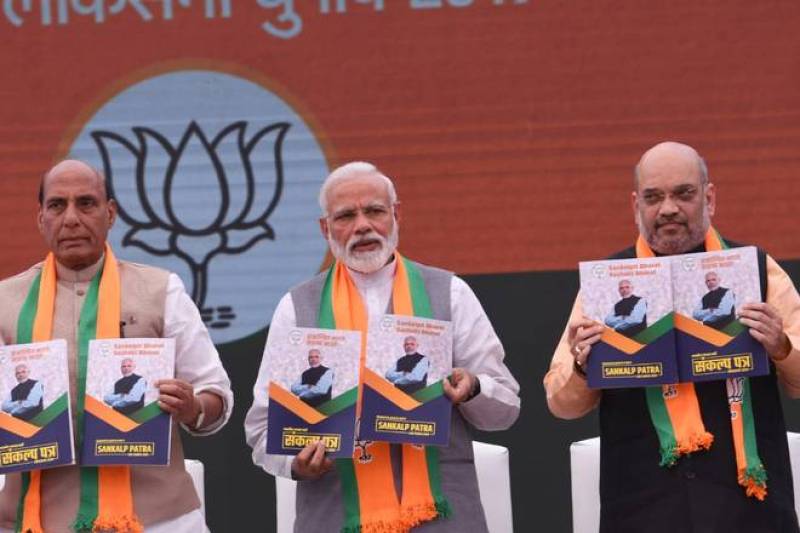 NEW DELHI - India’s ruling Bharatiya Janata Party stated on Monday it would remove special rights for the people of Jammu and Kashmir, as it launched its manifesto for the elections set to begin on Thursday.

Addressing the ceremony at the party headquarters in New Delhi, Prime Minister Narendra Modi said nationalism is our inspiration.

“We believe that Article 35A is an obstacle in the development of the state,” the BJP manifesto stated, referring to the 1954 amendment to the constitution.

Modi’s BJP has consistently advocated terminating Kashmir’s special constitutional status, which bars outsiders from buying property in the state, arguing that such laws have hindered its integration with the rest of the country.

With the fresh promise, political leaders in Muslim-majority Kashmir are skeptical of law and order situation, warning that rolling back the clause could lead to widespread unrest.

The party said it is committed to building a temple for Hindu god Ram in Ayodhya in place of Babri mosque, which was demolished by a group of Hindus in 1992 sparking communal tension.

The 'saffron party' also promised to reserve 33 percent of seats in the Indian parliament and state assemblies for women, if it is re-elected.

The party said it is committed to bringing transgenders to the mainstream through adequate socio-economic and policy initiatives, adding that it will ensure self-employment and skill development avenues for the community.

The party also promised a capital investment of 100 trillion Indian rupees ($1.44 trillion) on infrastructure by 2024, in a bid to create jobs for youth entering the workforce.

The party also pledged to simplify the goods and services tax (GST) as well besides doubling the income of farmers by 2022.

India is set to hold general elections for Lok-Sabha on April 11. The process would continue till May 19th and counting would start and end on May 23rd.