Nation mourns as Abdul Sattar Edhi passes away in Karachi 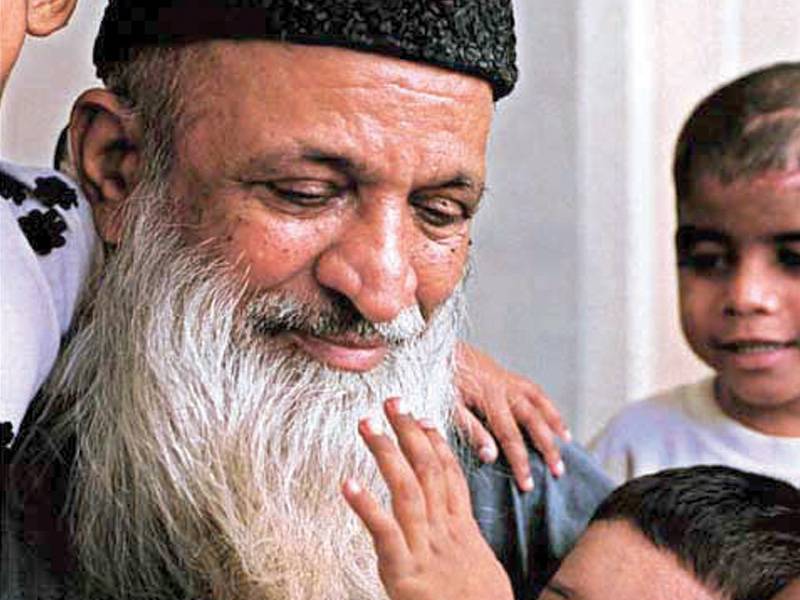 KARACHI - Celebrated social worker and founder of Pakistan's largest welfare organization Abdul Sattar Edhi, aged 92, passed away on Friday evening, sparking concerns about how the country's largely privatized welfare system will deal with his loss in addition to calls for a state funeral to honor his contributions at home and abroad.

Speaking outside the hospital, the philanthropist's son Faisal Edhi announced that Edhi’s funeral prayers would be offered on Saturday after Zuhr at Memon Masjid, following which he would be buried at Edhi village.

"He wished to be buried in the same clothes he used to wear. He also wanted to donate his body parts, but only his cornea can be donated as rest of the organs were not in healthy condition," said the philanthropist's son, in an emotional statement.

Earlier today, Faisal Edhi told media that his father's condition had deteriorated rapidly during dialysis at the intensive care unit of Sindh Institute of Urology and Transplantation (SIUT) earlier today. Edhi was put on a ventilator during the procedure after experiencing reported trouble with breathing.

He explained that Edhi had been coping with kidney failure for the past three years, for which he was was undergoing regular dialysis. Faisal added that his father could not undergo a kidney transplant due to his advanced age.

“It’s the age factor combined with ill-health that’s creating a bit of a problem for him. His food intake had lessened too, before but it’s got a bit better today,” said Anwar Kazmi, spokesperson of the Edhi Foundation.

Earlier on June 28, the celebrated social worker successfully underwent a 20-minute minor catheter change procedure to clear his dialysis line, which was choked previously. While his health had reportedly recovered in the days after this procedure at SIUT, his condition began worsening again today during a routine dialysis procedure.

Even during his final says, the renowned humanitarian displayed the selflessness and courage that won the hearts of many, both at home and abroad, by rejecting numerous offers to have his treatment paid for abroad by eminent backers such as Zardari and Malik Riaz.

News of Edhi's death was met with by an outpouring shock and heartfelt grief on social media, with many wondering how greatly his death would impact the country where he has long been considered the bedrock of a largely privatized welfare system.

Oh my God, I am seriously deeply hurt to know about the news of death of Edhi saab, He is undoubtedly a person who is going to be in Jannah

Many even questioned news of the social worker's death, whose death has mistakenly been reported a number of times before, most recently after the Foreign Office released a statement of condolence based on false information on June 18.

No other channel then Business Plus is running the news of Edhi Sb. death. please confirm.

The Edhi Foundation, which grew from a single-man single-room operation started in Karachi in 1951, is one of Pakistan's largest non-profit social welfare programs.

The Edhi Foundation provides 24-hour emergency assistance across the nation of Pakistan and abroad. The Foundation owns over 1,800 private ambulance vans stationed in areas across Pakistan.

The ambulance dispatchers in Karachi, one of the busiest cities in Pakistan, receive up to 6,000 calls a day, each dealt with in 10 minutes, on average. The organization also owns two private jets and one helicopter to assist in moving victims from hard-to-reach locations, especially during the event of a natural disaster.

The Foundation is also known for its childcare services, especially for orphans, street children and infants abandoned by destitute parents. Most Edhi emergency centers have a jhoola (cradle) located outside for mothers to leave their infants. These children are taken into custody, until their adoption by pre-screened families.

Edhi's numerous contributions to humanitarian causes both home and abroad have strengthened long-standing calls for him to be honored with a Nobel Peace Prize.