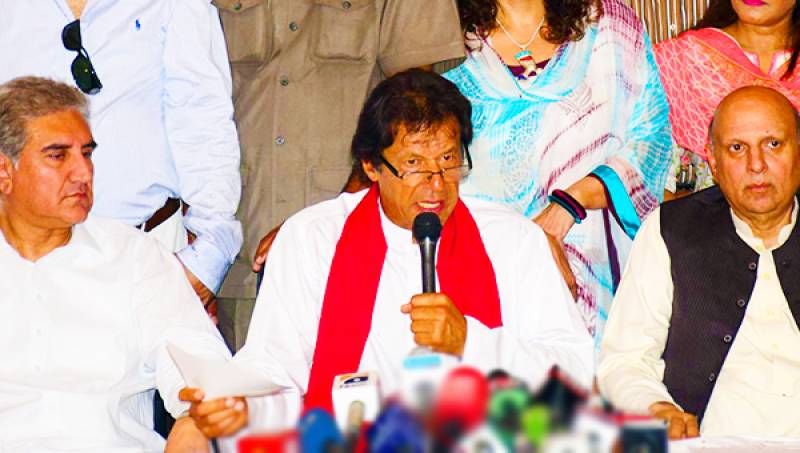 LAHORE (Web Desk) - Pakistan Tehreek-e-Insaf (PTI) chief Imran Khan in no mood to leave Prime Minister Nawaz Sharif free as he said in his latest statement that despite being the third richest person in the country, the premier’s name is not among even the top 10,000 taxpayers of the country, TheNewsTribe.com reported.

“Today, I want to explain my statement regarding Nawaz Sharif being the most corrupt person in Pakistan,” Imran told media persons at a news conference in Punjab’s capital city, Lahore on Thursday.

Yesterday, while addressing a massive crowd in Okara, the PTI chief had called the premier “the most corrupt person of Pakistan” and accused him of tax evasion and corruption.

In his latest media appearance after Okara’s emotional speech, PTI’s Khan went on to say that the Pakistan Muslim League-Nawaz (PML-N) government failed to live up to the promises they made to the nation during the 2013 election campaign.

The accusations didn’t stop there as the PTI chief went on to say that people were charged 70% extra in the power bills due to the government’s corruption and embezzlement.

“Wapda had to bear a Rs980-billion loss due to the misappropriation and irregularity of funds by the government,” he said, quoting a report published by the Auditor General of Pakistan.

Imran called for an inquiry for the Asian Development Bank (ADB) to unearth the irregularities carried out in the project.

Accusing the PML-N of looting the public’s money by selling off public assets, Imran said the current government has left the Pakistan Steel Mills and the Pakistan International Airlines practically crippled, although these institutions were generating profit in the past.

Imran also referred to Raymond Baker’s book Capitalism’s Achilles Heel to highlight the corruption of Nawaz Sharif during his earlier tenures, alleging Nawaz of embezzling Rs42 billion in the 90s.

It is worth mentioning here that PTI and PML-N all set to face each other in by-elections in 3 different national and provincial assemblies constituencies in Lahore and Okara districts of Punjab.