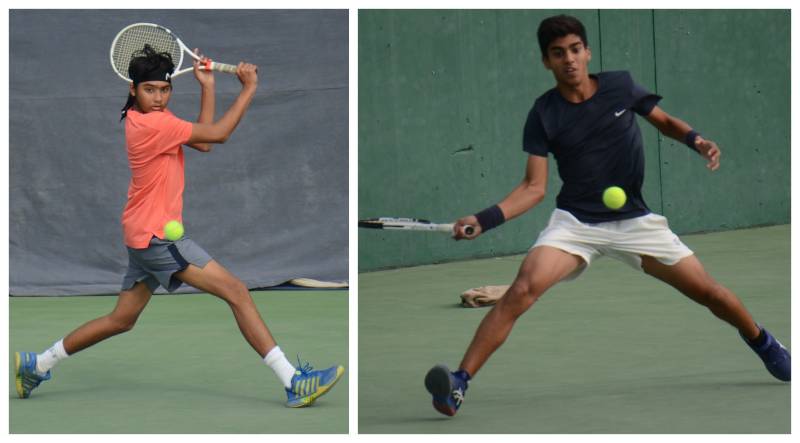 In the second semifinal, top seed Bilal Asim struggled hard to win his encounter against 5th seed Ahmad Nael Qureshi. In the first set, the score reached 5-5 games all, Bilal managed to break 11th game of Qureshi to build up the lead 6-5 and won the 1st set at 7-5 by holding his serve. In the 2nd set, Qureshi changed the pace and played aggressively to win the set comfortably at 6-1, and leveled the match 1-1 set all.

In the final set, both the players played excellent tennis, but Bilal Asim by breaking the 2nd and 4th games of Qureshi, built-up a lead 5-2, and finished the match by holding the 9th game at 6-3 and qualified for the final of Junior 18&Under. Bilal Asim is a student of renowned coach Rashid Malik and training hard under his coach and mentor, which is yielding fruit in shape of national titles for him one after another. Bilal thanked his coach Rashid Malik and hoped that under his guidance, he is looking forward to further excel at national and international level.

The best encounter of the day was played between Sami Zeb Khan and M Talha Khan in the Junior 18&Under category. Third seed Sami Zeb struggled hard to win his match against talented upcoming youngster M Talha of Islamabad. In the first set, Talha built up the winning lead 5-1 by breaking the 4th and 6th games of Sami. At this stage, Sami changed the pace of game and reduced the winning lead of Talha by breaking the 9th game, and by holding the 10th game, the score reached at 5-5 games all. The set was decided in the tie break, which was won by Sami 14-12.

The second set was again marked in the same style and both the players demonstrated high standard of game of tennis which lasted in favour of Talha and the match was level at 1-1 set all. In the final set, Sami again changed the pace and strategy of the game plan, and managed to break the 8th game of Talha to build up the winning lead 5-3 and kept the same pressure in the 9th game by hitting some excellent cross-court shots and won the match and set at 6-3, and qualified for the final. The match lasted 2 hrs 30 minutes.

Top seed Aqeel Khan and 2nd Seed Muhammad Shoaib will vie for the top honor in the Men’s Singles final of 35th Federal Cup National Ranking Tennis Championships, after winning their respective semifinals against Muzammil Murtaza 2-1 and Mudassar Murtaza 2-0. The final will be played tomorrow at 2:00 PM.

In the first semifinal, top seed Aqeel Khan was in fine touch but faced tough resistance from Muzammil Murtaza. In this match, Aqeel and Muzammil played high-caliber and remarkable tennis and excellent forehand and backhand drives were witnessed. In the first set, Muzammil’s ground strokes were prefect in rhythm and he was flawless from the net and outpaced Aqeel to win the first set at 6-4.

In the second set, Aqeel bounced back aggressively and gained his strength utilizing his wide experience and levelled the match 1-1 set all. In the decisive set, Aqeel kept the same pressure and won set and match at score of 6-3 by breaking second game of Muzammil and qualified for the final of the men’s singles. The match lasted 2 hrs 16 minutes.

In the boys/girls 12&Under singles semifinals, Abdur Rehman beat Muhammad Shakib 4-1, 4-2 while Haziq Arejo beat Hajra Suhail 4-1 4-1. Mr. Tariq Mehmood Murtaza Chairman Rawalpindi Development Authority and President Islamabad Tennis Association will grace the occasion on men’s singles final on Saturday at 2:00 PM and will distribute the prizes amongst the winners and runners-up.