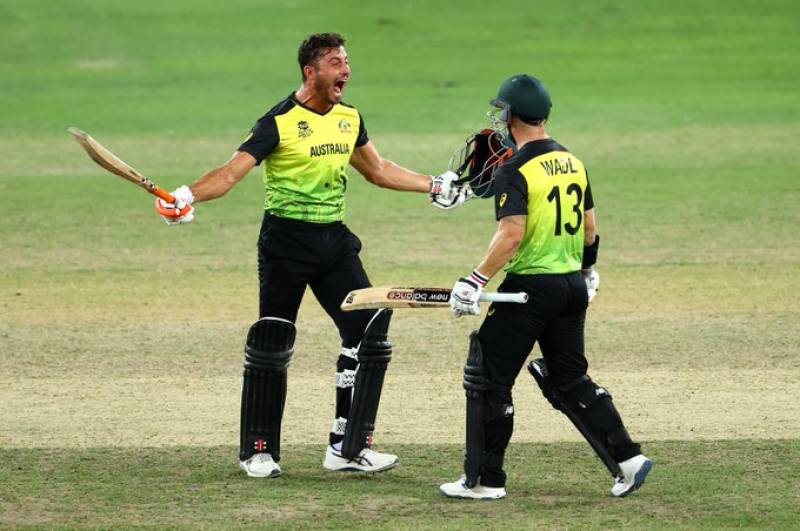 DUBAI – Matthew Wade and Marcus Stoinis played a vital role in Pakistan's defeat against Australia in the second semi-final of the T20 World Cup in Dubai on Thursday.

Wade scored 41 runs off 17 balls and Stoinis hit 40 runs off 31 balls at a time when Australian wickets were falling one after other.

Earlier, Pakistani spinner Shadab Khan continued to send Australian batsmen to pavilion one after other and Maxwell became the fourth batsman to fall prey to his delivery. Earlier, Shadab removed in-from David Warner and Steve Smith.

Shadab Khan first removed Mitchell Starc who was fully charged and hitting the Pakistani bowlers in all directions.

Before Shadab, Shaheen launched another back-breaking attack on the Australian side, removing their captain in the first over.

Earlier, Pakistan set a target of 177 runs against Australia in the second semi-final of the ICC Men’s T20 World Cup in Dubai today (Thursday), with both eying the spot in the final match of the tournament.

After Babar Azam was sent to the pavilion at 39, Mohammad Rizwan (67) gave and Fakhar Zaman gave power-packed performances. Zaman made unbeaten 55 to post a tough target for the rival team.

Asif Ali went for the duck while Shoaib Malik could make one score only.

Earlier, Australia won the toss and decided to field first.

The winning team will face off New Zealand that have crushed England by five wickets in the first semi-final to qualify for the final for the first time in their history.

The final four semi-finalists were decided after a hard-fought Super 12 stage, where the top two teams from each group made it through. While England and Australia qualified from Group 1, Pakistan and New Zealand made it from Group 2.

Pakistan are the only team among the four to be unbeaten so far. They won all games in Group 2, while New Zealand won four of their five matches, confirming their place in the top two with a win over Afghanistan in their final match.