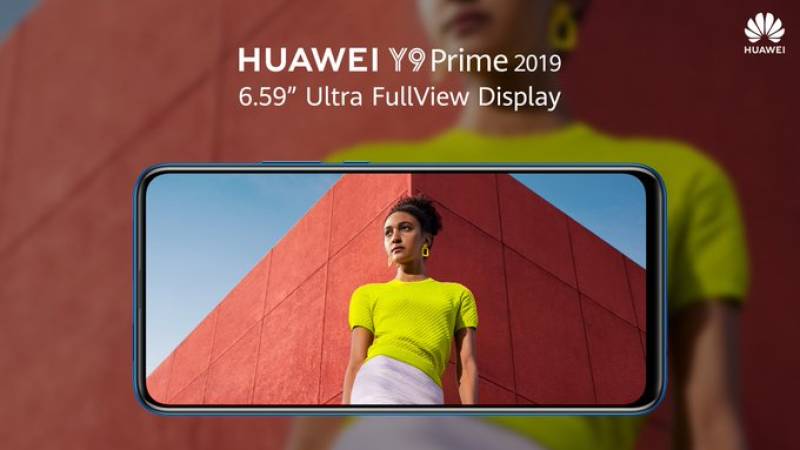 LAHORE – The new Huawei Y9 Prime 2019 represents a break from conventional smartphone designs. It is the first Huawei device to offer a pop-up camera that too exceeds all competition due to its high specifications against an amazing price.

It abandons any form of the notch, opting instead to expand the actual display area by a dramatic degree. Remarkably, the device contains no notch, slider, or hole.

With almost no bezels, the phone packs a 16MP + 8MP + 2MP triple-camera on the back and a 16MP, AI-enhanced pop-up selfie camera – that lets the users take ultra-wide pictures.

The front camera is equipped with F/1.8 aperture which is a top performer receiving 50% more light than the F/2.2 aperture that is more commonly seen on the market. It also focuses more quickly and controls noise more effectively. This empowers Y9 Prime users to recreate scenes in their full complexity, with enhanced image clarity, contrast, and overall quality.

The screen is simply a smooth and unobstructed glass surface, offering a futuristic feel and wholly immersive viewing experience. The full-screen display measures at 19.5:9 in aspect ratio, and takes up 91% of the front surface, giving the phone a slender body and first-rate aesthetics.

Thanks to Huawei’s pioneering research and development, the smartphone also utilizes artificial intelligence creatively to identify gaming scenarios and match them with real-life sensations, like reloading, recoil, and the waves from an explosion.

The latest addition to Huawei’s smartphones family has 4 GB of RAM. With an internal storage capacity of 64GB and 128GB, the device has an expandable memory capacity of up to 1 TB.

Huawei Y9 Prime runs on operating system EMUI 9, which is based on Android 9.0 Pi.

SHANGHAI - Chinese telecommunications giant Huawei said Wednesday that its 5G business has not been impacted by the ...

The ‘Midrange Killer’ phone, which was formally launched on Monday (July 09), has gone on sale for an unbeatable price tag of PKR 33,999/- and is available in three colours: Midnight Black, Sapphire Blue, and Emerald Green – each with an enchanting and unique visual identity.