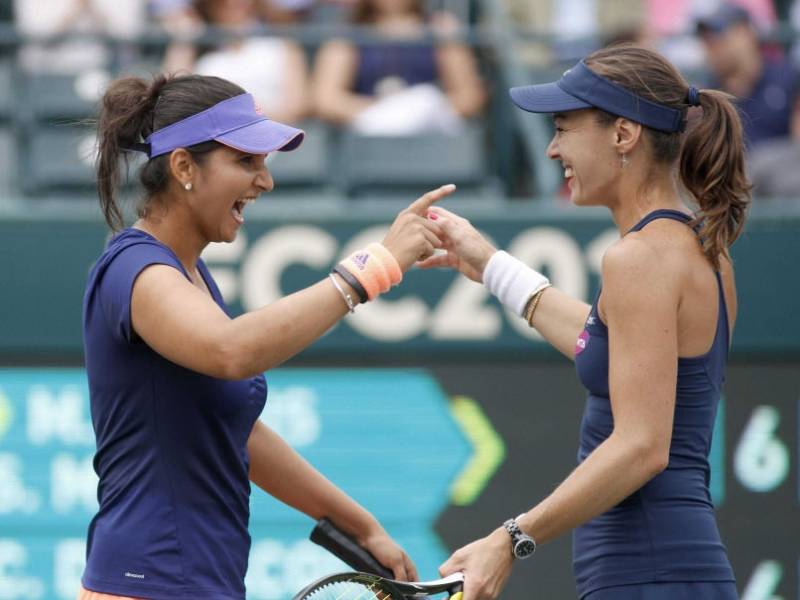 BEIJING (Web Desk) - Top women’s doubles pair of Sania Mirza and Martina Hingis have won their eighth title of the season as a team,  in the China Open final here on Saturday.

They broke the first service game of their opponent’s to take an early 2-0 lead at the Beijing Olympic Green Tennis Center.

But their opponents immediately broke back to be on level terms 2-2. From there on the two team’s keenly contested and held on to their serves.

The evenness extended to a tie-breaker where Sania-Martina blinked first at 9-11 to surrender the first set.

Sania-Martina upped their intensity to race to a 4-1 lead in the second set and claimed it 6-1 to force the match into the third set tie-breaker.

The tie-breaker was also closely fought with both teams matching each other stroke for stroke.

But ultimately the Indo-Swiss duo held their nerve to claim the title at 10-8. They won 82 of the total 145 points played, a 56 percent winning rate.

The leading women’s tennis doubles pair entered the final, thumping the Chinese duo of Chen Liang and Yafan Wang 6-2, 6-3 in a one-sided clash on Friday.

Sania and Martina are the reigning Wimbledon and US Open champions. They tagged together as a team in March and won Women’s Tennis Association (WTA) titles in Indian Wells, Miami, Charlestion, Guangzhou and more recently Wuhan.

Sania reached the final of this event for the fourth time in a row. It was her second title here, after winning in 2013 with Zimbabwean Cara Black.