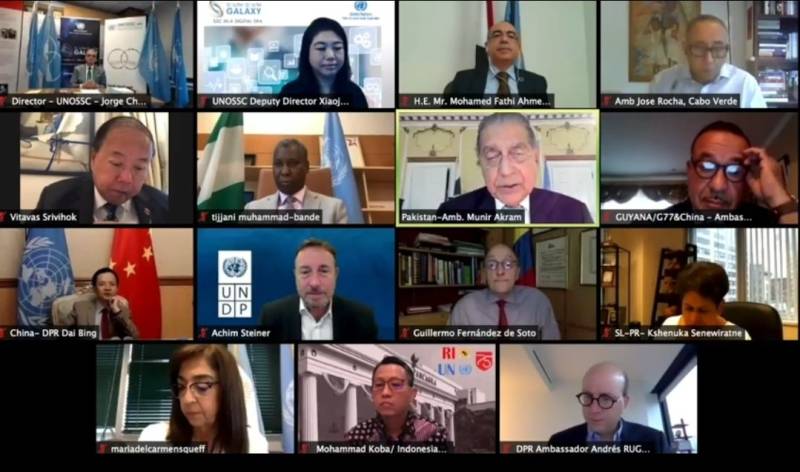 NEW YORK – Ambassador and Permanent Representative of Pakistan to the United Nations, Munir Akram said that the vaccine is the first step in this direction that a common good must be made for all mankind.

While addressing the commemoration ceremony of UN Day of South-South Cooperation as ECOSOC President, he said that research so far has focused on the priorities of the developed countries not the developing

“Our leaders came together, 40 years ago to conceive this idea of mutual cooperation in the first conference on technical cooperation among developing countries, he said.

And “We must welcome the fact that in this interim 40 plus years South-South trade has expanded exponentially. Mutual investments between South; the southern countries have likewise escalated to a level that is almost equal to that of the developed northern countries in the developing countries,” he added.

The BAPA+40 outcomes is a reflection of the evolution and development in the scope of our cooperation, the envoy said, adding: “We have constructed institutions of cooperation across the world and we should take pride in the fact of the institutions such as the ASEAN that has promoted South-South cooperation to an unprecedented level and provides an example for many of us in the various regions to work.

Buenos Aires outcome document of the Second High-level United Nations Conference on South-South Cooperation”, in March 2019 where heads of delegations and other officials — gathered on the third and final day of the Conference, also known as “BAPA+40” — cited significant changes in international politics and economic relations, to create conditions conducive to promoting South-South cooperation, pursuing sustained economic growth and building national and collective self-reliance.

He suggested to focus on some policy issues that are critical for our future: First, “finance, as, the developed countries have issued fiscal deficits to the tune of $11 trillion to finance their recovery from COVID, the developing countries are struggling to find that reserve  in order to be able to spend on their recovery. So there is an inequality”.

Secondly, “the key to the SDGs is infrastructure investment where we need to find ways to focus and to develop our institutions of cooperation and investment in infrastructure” he informed.

And “third is the area of science and technology, where we need to align the intellectual property regime of the world with the SDGs”: he said.

He also stressed the need to bridge the digital divide. This is the pathway to a transition to modern economies, and we have amongst us examples which can provide us the impetus for bridging the digital divide: he stated.

Ambassador Munir Akram urged to utilize all the capabilities to work together to “develop our cooperation and to address the policy issues which are the key for us to transform our developing economies into modern economies and advanced countries”.

“These are our priorities which I have focused on in my opening statement, as the President of the Economic and Social Council, and I look to the cooperation of all my friends in the group of 77 and China to promote these vital objectives for the southern countries”: he said.

He thanked the distinguished President of the General Assembly, His Excellency Mr. Tijjani for his statement, as well as welcoming remarks that have been conveyed by the administrator of the UNDP on behalf of the Secretary General and himself.