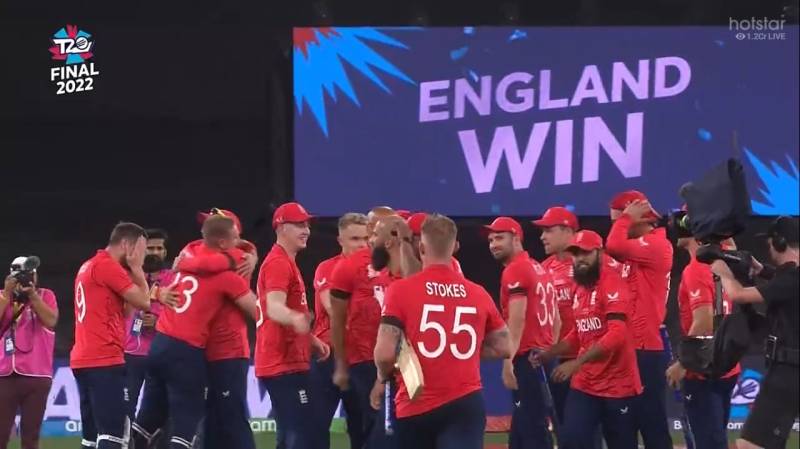 England chased down the target of 138 runs in the second last over with the five wickets in hand.

Earlier, England won the toss and elected to bowl first. Babar-led squad could only manage to score meager 137 runs by losing eight wickets, around 30 scores short of prediction. Green shirts made 29 runs at the loss of one wicket in the first five overs.

A Ben Stokes special at the MCG! 😍

Batters earlier struggled to make a foundation for a big score against in-form England as they scored 100 in the 15th over.

Mohammad Haris was then dismissed as Adil Rashid strikes with his maiden ball. Haris attempted to charge down the track but was taken by Ben Stokes at long-on.

Congratulations @ECB_cricket. You are worthy champions.

Enjoy and celebrate this moment, and we look forward to hosting you in December for the three-Test series.#T20WorldCup | #PAKvENG pic.twitter.com/XYRzJgb7Wv

Skipper Babar Azam was then dismissed with 32 off 28 and middle order Shan Masood and Iftikhar attempted to gain momentum.

Later, Iftikhar was out for zero while Shan Masood made 32 runs off 28.

In reply, England achieved the target in the second last over of the match. Ben Stokes made half-century which led his side to the victory.