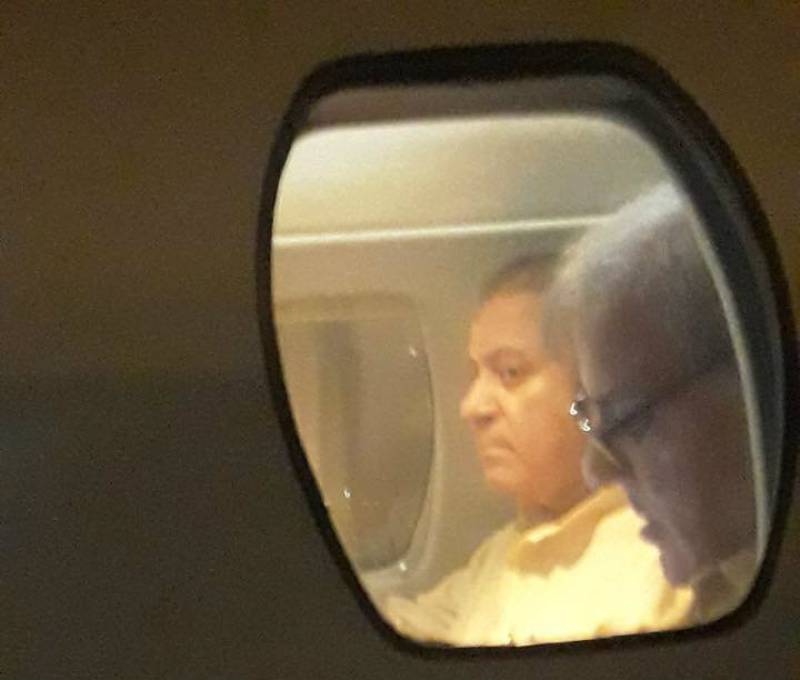 Kulsoom, 68, wife of former prime minister Nawaz Sharif, breathed her last on Tuesday at a hospital in London after a prolonged illness. She was diagnosed with lymphoma last year, barely a month after Nawaz Sharif was removed from office by the Supreme Court.

Television footage shows that Sharif, Maryam and Safdar were being taken out of the Adiala Jail in a motorcade. Soon after their release, Nawaz Sharif, Maryam Nawaz and Captain (retd) Safdar departed for Lahore via special plane from Islamabad Airport late on Tuesday.

A notification issued by the Punjab Home Department said that the three were released for 12 hours to attend the funeral of Kulsoom Nawaz.

The decision to release the Sharifs came on an application moved by Sharif’s younger brother and PML-N president Shehbaz Sharif. “The duration of permission granted shall not exceed twelve hours, which shall not include the time consumed for journey to and from the prison,” the notification said.

Earlier, Information Minister Fawad Chaudhry told the media that the government had no objection to his being given parole, instead he assured that Nawaz’s plea will be legally processed.

Kulsoom, the former first lady, was under treatment at London’s Harley Street Clinic since June 2017, placed on life support last night after her health deteriorated.

Kulsoom is survived by her husband and four children, Hassan, Hussain, Maryam and Asma.

Her funeral prayers will be offered at Regent’s Park in London Thursday and her body will be brought back to Pakistan after fulfilling legal obligations on Friday. She will be buried alongside her father-in-law, Mian Muhammad Sharif, at Jati Umra.

Meanwhile, Shehbaz Sharif will leave for the United Kingdom on the next available flight to bring back the body of his sister-in-law.

The deposed prime minister, his daughter Maryam Nawaz and her spouse Safdar, were convicted by an accountability court in the Avenfield reference case on July 6.

Nawaz Sharif was sentenced to ten years in prison, while Maryam was imprisoned for seven years.

The new federal cabinet also placed their names on the Exit Control List on August 21. The Lahore High Court has also denied their plea to set their convictions aside.