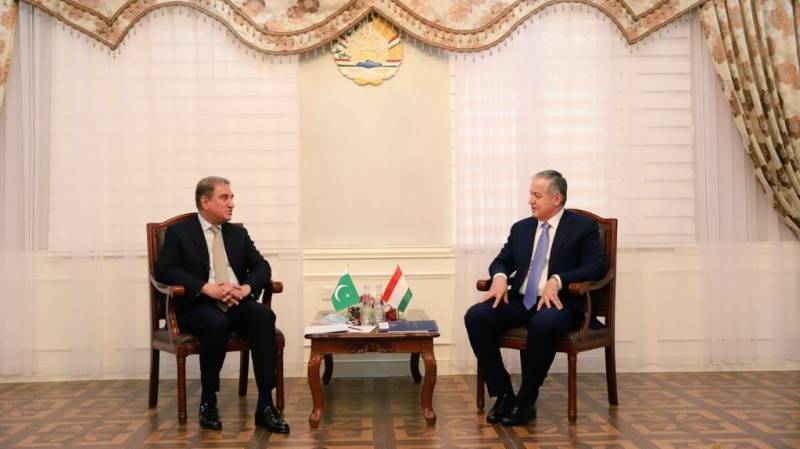 ISLAMABAD — Foreign Minister Makhdoom Shah Mahmood Qureshi held a bilateral meeting with Foreign Minister of Tajikistan Sirojiddin Muhriddin on the sidelines of the Council of Foreign Ministers meeting of the Shanghai Cooperation Organization (SCO-CFM) in Dushanbe on Monday.

According to a press release issued by the Pakistani Ministry of Foreign Affairs, recalling the recent visit of the President of Tajikistan to Pakistan, the two foreign ministers resolved to further enhance bilateral trade, promote regional connectivity and strengthen people-to-people linkages in line with the vision of the two leaders.

The two foreign ministers reviewed the entire range of bilateral relations, with particular focus on reactivation of Joint Ministerial Commission, affected by the COVID-19 pandemic; enhancing parliamentary linkages and early completion of CASA-1000.

Foreign Minister Qureshi emphasised the importance of regional connectivity, transit trade mechanisms and cooperation in the fields of education and tourism between the two countries. They also exchanged views on recent evolving situation in Afghanistan.

Good to be in Dushanbe for the #SCOCFM and to meet with FM #SirojiddinMuhriddin on the sidelines. Following up on President Rahmon’s visit to Pakistan, we agreed to focus on increasing bilateral trade and connectivity in line with the vision of our respective leadership. pic.twitter.com/8nu1thyVC1

Foreign Minister Qureshi apprised his Tajik counterpart of Pakistan’s facilitator role to achieve durable peace and stability in Afghanistan. He reiterated that there was no other way except an inclusive, broad-based and comprehensive political settlement in Afghanistan. He expressed the hope that the Afghan leaders would understand the urgency of the situation and seize historic opportunity. He reiterated Pakistan’s consistent support for a peaceful, united, stable and prosperous Afghanistan.

Appreciating the close cooperation between the two countries at the multilateral fora including at SCO, Foreign Minister Qureshi congratulated his Tajik counterpart on successful stewardship of SCO under the Tajik Chair this year.

The two sides agreed to continue to remain in contact.