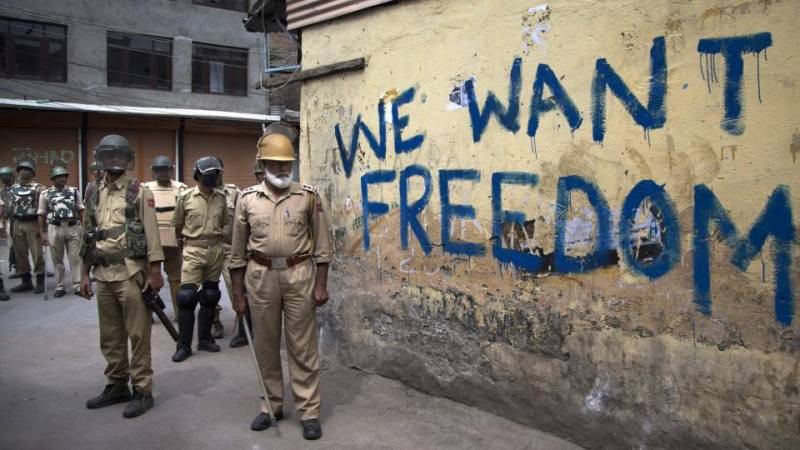 ISLAMABAD - Leaders of All Parties Hurriyat Conference (APHC) Tuesday said the facade of democracy in India had been exposed with the postponement of so-called state elections in Indian Occupied Kashmir.

General Secretary APHC Muhammad Khatib said through the so-called elections, Kashmir issue would not be resolved as granting right of self determination and talks was the only one solution of the issue.

He said the real face of the so called Indian democracy had been exposed before the world with the torture and oppression against innocent Kashmiris.

He said the APHC leaders were united on the issue of elections and felt that the unrest could not be curbed with the sham elections held under the Indian government.

Khatib said Kashmiris would continue their freedom movement, and the incidents like Pulwama were a reaction to the acts of cruelty by the Indian forces.

He further said India did not give any proof of the Pulwama incident and blamed Pakistan as it wanted to equate freedom movement of Kashmiris with terrorism.

The report of United Nations Human Rights Commission had revealed serious violations of human rights by India, he said and mentioned that black law had been enforced in Indian occupied Kashmir, Abdul Matin added.

He said human rights abuses in Jammu and Kashmir were at its peak as mass killings, enforced disappearances, torture, rape, sexual abuse and suppression of freedom of speech was a daily occurrence and highly contentious use of pellet-firing shotguns had crippled many people for life.

He said all the governments that were installed in Occupied Kashmir were puppet and India was trying to put a stop to the political struggle of Kashmiris adding that India would have to come to the negotiating table as sham elections would not resolve the issue.