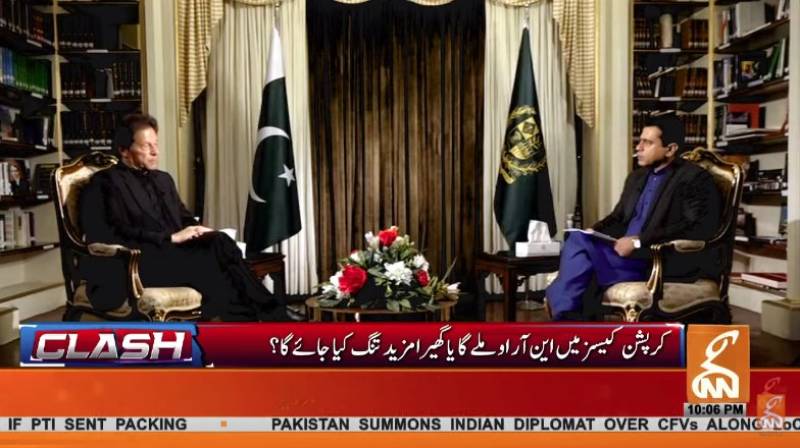 “He [Nawaz] has committed the highest treason by targeting military leadership which is tantamount to incite mutiny in the armed forces,” the premier said in an interview with a local TV channel Thursday night.

“How all of a sudden Nawaz who was brought into politics by military dictator General Ziaul Haq became champion of democracy and Indian media is portraying him as a hero,” he added.

When asked about the evidence, PM Imran said intelligence agencies had information about Nawaz’s links with India. “We cannot sue Nawaz on the basis of intelligence reports because they are not acceptable as evidence in the courts.”

The premier was referring to Nawaz's recent speeches in public meetings of his party and the 11-party opposition alliance – Pakistan Democratic Movement – where he accused the security establishment of orchestrating his ouster. He had named Chief of Army Staff General Qamar Javed Bajwa and director general of the Inter-Services Intelligence (ISI), Lt Gen Faiz Hameed during his speech in PDM's Gujranwala rally and said that there was "a state above the state".

"When they say that the [military leadership] is bad and the rest of the army is good; is army a democratic party that would move a no-confidence motion? You (Nawaz) are telling the army to launch a coup, to rebel [against the leadership]. Can there be a bigger [form of] treason?"

"A person who is sitting outside in a Mayfair luxury flat bought with stolen money is telling the army [personnel] to rebel. He is also trying to drive a wedge in the judiciary by taking the name of one judge saying he is good while another, who was a chief justice and gave the Panama judgement against him (Nawaz), was a bad judge."

The prime minister went on to say that former ambassador to the United States Hussain Haqqani was "running Nawaz's communication strategy".

"Look at Hussain Haqqani; who doesn't know what he is doing abroad along with the Indian lobby. His entire communication strategy is anti-army. 'Pakistan army is evil, Imran Khan is a puppet'. Whose narrative is this? India is saying the same things," PM Imran said and added that India wanted to "discredit and break Pakistan into three pieces; this is the stated policy of their think tanks".

Referring to former prime minister Nawaz Sharif, the premier said that he had "run away abroad" after lying about his health. "Nawaz Sharif suits India, not Imran Khan," he said.

Speaking about the ‘Karachi Incident’— the events surrounding the arrest of opposition leader Capt (retd) Mohammad Safdar in Sindh’s provincial capital, the prime minister said it had benefited his rival party – PML-N.

“If I were there I would have not taken action against them because this would overshadow their other crimes which are far more serious,” he added.

The premier also said, “If you put them behind bars over issues like these it will help them [to gain sympathies].”

RAWALPINDI – The Court of Inquiry formed on the orders of Chief of Army Staff (COAS) Gen Qamar Javed Bajwa has ...

To another question, the PM reiterated his government's firm resolve to continue accountability process in the country.

He said the opposition tried to blackmail government in the pretext of FATF laws.

"The purpose of opposition parties is just to protect the money they looted from the people of Pakistan," he continued.

He said the past governments destroyed the national institutions and large public sector organizations are under heavy debts.