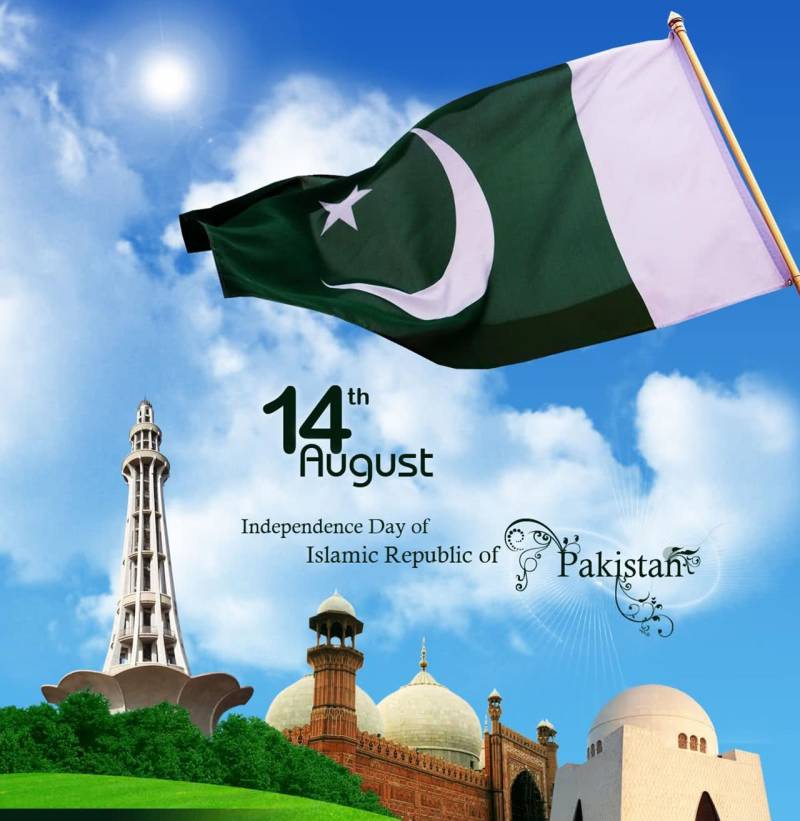 LAHORE - Sky roared with fireworks as clock ticked 12:00 am to begin celebrations of 70th Independence Day of Pakistan on 14th August.

The highest flag of South Asia and eighth highest in the world was hoisted at Wagah Border in Lahore.

The army chief General Qamar Javed Bajwa hoisted the largest national flag in the history of Pakistan at Wagah Border on the eve of Pakistan’s 70th anniversary late on Sunday night and said that though “we made a few mistakes in the past, we are on our way to development following the Constitution.”

Meanwhile, fireworks celebrations were held across Pakistan in all the cities. All major public and private buildings, roads and avenues have been tactfully decorated with illuminations, national flags, portraits of the national leaders, banners and buntings to give a festive look.

People took to streets with national flags on their bikes and other vehicles, some even wrapped it around their upper torso and head. Gatherings of sea of people could be witnessed at landmark places.

The nation is all set to celebrate 70th Independence Day on 14th August, Monday, with traditional zeal and pledge to safeguard the country against any threat and make it a truly Islamic welfare state as envisioned by founder of Pakistan Quaid-e-Azam Muhammad Ali Jinnah.

On the occasion of Pakistan’s 70th Independence Day, the ISPR has released a special song to pay tribute to the armed forces and eulogize the sacrifices rendered for the motherland. The song features renowned singer Shafqat Amanat Ali.

After the Fajar prayers, special prayers will be offered for the prosperity, integrity and solidarity of the country and success of the long drawn struggle of Kashmiris.

The main event of the day will be flag-hoisting ceremony at Parliament House.

The President will address the nation on this occasion.

Meanwhile, all major public and private buildings, roads and avenues have been tactfully decorated with illuminations, national flags, portraits of the national leaders, banners and buntings to give a festive look.

A host of events including seminars, conferences, lectures, debates, speech contests, exhibitions, quiz competitions, stage dramas and mushairas have been arranged by different organizations in connection with the day.

The President along with Prime Minister, Vice Premier of China, Chairman Senate and Speaker National Assembly will lay wreath at Monument of unsung heroes of democracy at the Parliament House on Monday.

The change of guards ceremony will also be held at Mazar of Quaid-e-Azam, where a contingent of Pakistan Navy will assume the guard duties.

Singers from the Christian community have come together to sing a medley of patriotic songs whose video was released online last week.

It is a gesture of ‘gift’ that perhaps has the power to melt rifts and gives more reason to build bridges of love between two lovely nations.

Similarly, as Pakistan prepares for its 70th Independence Day celebrations, Indian Acapella Band Voxchord has sent a heartwarming gift across the border: a beautiful rendition of Pakistan’s national anthem.