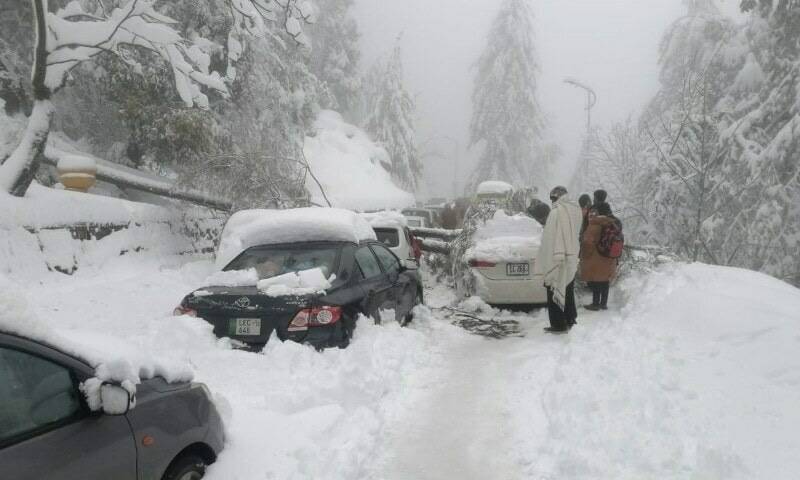 ISLAMABAD – A lack of preparedness on part of the National Disaster Management Authority (NDMA) resulted in loss of precious lives in Murree, the Islamabad High Court (IHC) ruled on Thursday.

"Prima facie, the failure to implement the NDMA Act is the sole factor which had led to the loss of precious innocent lives, including nine children," IHC Chief Justice Athar Minallah said in the order.

The fatalities would not have occurred if the NDMA was "prepared and had taken prior measures", the order reads.

"Further delay in implementation of the NDMA Act is likely to expose human lives to grave risk," the judge said.

Last week, tens of thousands of people flocked to Murree, creating worst traffic jams in the hilly area. And then came the snowstorm, killing at least 22 tourists, including women and children. Eight of them froze to death while others probably died from asphyxiation.

Murree resident Hammad Abbasi had filed a petition in the high court, calling for an investigation into the incident and action against those responsible.

The petitioner's counsel informed the court at the onset of the hearing, "When tourists were going to Murree through toll plaza, no one stopped them or informed them of the danger."

On this, Justice Minallah called Deputy Attorney General (DAG) Syed Tayyab Shah to the rostrum, instructing him to read the laws about the NDMA.

"This is such a massive body in which all people concerned are present. The opposition is there too. Has there ever been a meeting of this body?" the judge inquired from the DAG about the National Disaster Management Commission.

The DAG responded he could inform the court after taking instructions in this regard.

The judge told NDMA officials to appear before the court and tell if they ever held a meeting. There should have been a plan in place to deal with such situations, he said.

"Come and inform the court if the meeting did not take place, why was it so? The plea in the petition is that timely action should have been taken," the judge remarked.

The hearing resumed after an NDMA representative appeared in the courtroom.

"Determine who is responsible for the 22 people who died," the judge asked the official, who then proceeded to read out the law related to the authority.

"If preparations and measures had been taken, 22 people and children would not have died," the judge remarked, questioning: "Has there ever been a meeting of the NDMA [on disaster management]?"

The NDMA member replied that five meetings had been held, and when asked if any opposition members had requested a meeting, his answer was in the negative.

The judge asked if the NDMA director general had ever requested the prime minister to convene a meeting, and he was informed that a meeting had been requested during the pandemic.

"The law is present. If it was implemented, then no life would have been lost. It is such a strong law that it accords responsibility to every district. Did the NDMA identify those responsible [for the tragedy]?" Justice Minallah asked.

When the official replied that it was the responsibility of the provincial government, the chief justice berated him and said: "Then you did not read the NDMA law properly."

"What plan did you make for Murree or Rawalpindi districts? It was the responsibility of the NDMA to have regular meetings. Lack of meetings is a failure of NDMA," Justice Minallah said.

Justice Minallah reprimanded the official for putting the blame on the provinces in front of the court and said that there wasn't even a need for any inquiry in the case.

"The NDMA is responsible. If meetings weren't being held then you should have informed. If the laws were followed then this accident would not have happened."

Justice Minallah directed the NDMA member to ask the prime minister to call a meeting of the authority and identify those responsible. "Every member of the commission is responsible for this incident," the judge reiterated.

ISLAMABAD – The administration has sealed more than a dozen hotels in Punjab’s resort town of Murree for ...

The IHC ordered for the prime minister to call a session of the National Disaster Management Commission next week and the NDMA to submit a report on the commission's behalf to the court by January 21.

The court also directed the commission to inquire why the provisions of the NDMA Act were not implemented, reasons for the Rawalpindi District Management Authority being disfunctional and if a district plan covering Murree was prepared.

The commission was instructed to identify reasons for the non-implementation of the district plan.

"The commission, after fixing responsibility on officials/entities involved in failure to implement the provisions of the NDMA Act, shall make them accountable by proceeding in accordance with law," the order stated.

It added that the commission should probe "the lack of preparedness and lack of response" that led to the loss of lives and then tack action as required under the law.