'Pizza only once a month, but saree every day,' says unique agreement signed at Assam wedding 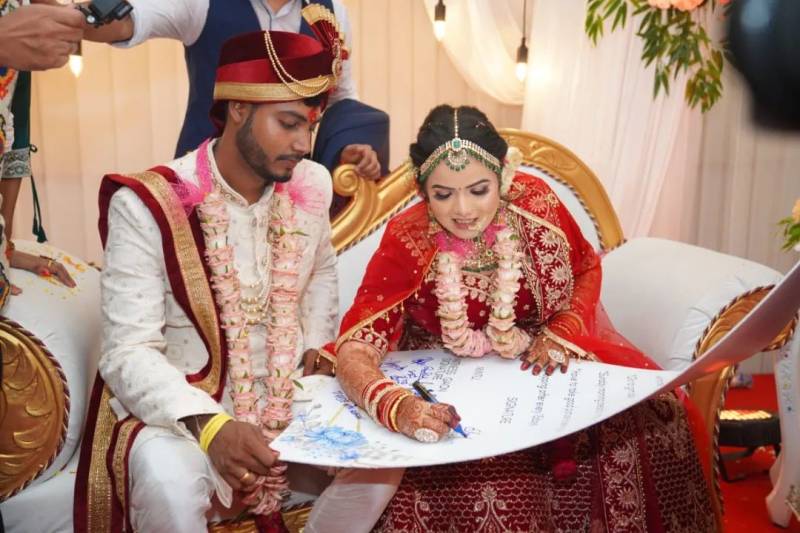 Weddings nowadays have transitioned from traditional ones to some quirky affairs.

A couple from the Indian state of Assam grabbed the attention of the netizens with a unique addition to their wedding.

The couple identified as Shanti and Mintu was seen signing a wedding contract after they tied the knot. Shanti Prasad, 24, of Paltan Bazaar, Guwahati exchanged vows with Mintu Rai.

The contract had quite bizarre points in it involving “one pizza a month, always saying yes to “ghar ka khana (homemade food)", “must and should" wear saree every day, late night parties “allowed" but “only with me", going to the gym daily, making Sunday breakfast, taking good pictures at every party and going shopping every 15 days.

Shanti said, “Our family was very happy with the agreement."

The video has been viewed over 40 million times and received tons of reactions. Some people were amused to see the terms on the contract. The clip was shared by Wedlock Photography Assam on their Instagram handle.

Netizens had several opinions where some called the contract "toxic" while others have taken offence at the "archaic and sexist" conditions. Most have simply expressed shock over the couple agreeing to have only one pizza every month.

PESHAWAR – People of a village in northwest Pakistan have unanimously decided to put curbs on expensive weddings, ...