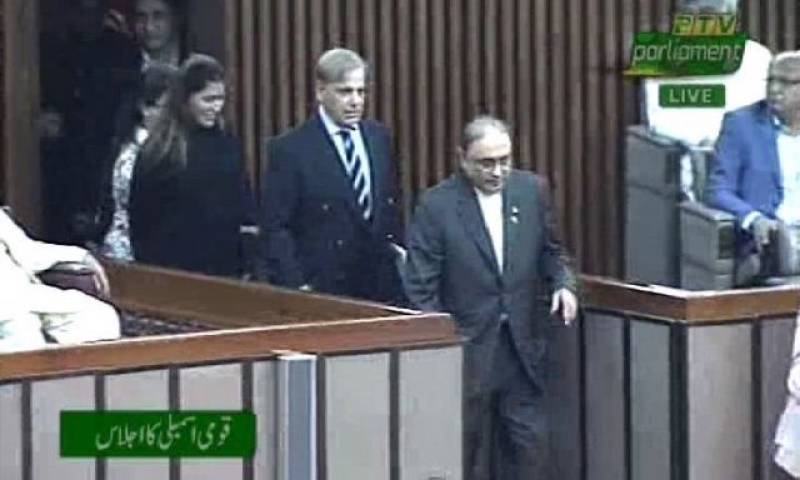 ISLAMABAD – Leader of the Opposition in National Assembly Shehbaz Sharif Monday urged the government to reconsider the award of contract of Mohmand Dam.

Speaking in the National Assembly, he said the Pakistan Muslim League-Nawaz (PML-N) government had only initiated the tendering process while the contract for Mohmand Dam was awarded by the Pakistan Tehreek-e-Insaf government through a single bidding.

He said the government should have examined the cost of similar hydro dam projects at other places and should have preferred re-bidding after receiving a single bid.

Shehbaz Sharif alleged that electricity was being generated with costly furnace oil while power plants in Punjab were being run on half capacity due to non-availability of gas. Pakistan was not facing an imminent electricity shortage, he added.

Referring to the problems of common man, he said the prices of gas, electricity and essential commodities were increasing.

He called for a debate on the increasing circular debt.

The opposition leader said the country urgently needed new water reservoirs. The last PML-N government, he said, had spent more than Rs 100 billion to acquire land for the Diamer Bhasha Dam, and allocated Rs 2 billion for the 800-megawatt Mohmand Dam on the Swat river.

He said the previous government had tackled the electricity load-shedding, which at one stage went on for 18-20 hours in a day.

Shehbaz claimed that the PML-N government had set up LNG and other power plants through transparent bidding without suspending procurement rules to speed up the process.

The Punjab government made the investment for energy projects and saved Rs 160 billion while generating electricity for the whole country, he claimed.

PESHAWAR – The inauguration ceremony of the Mohmand Dam has been postponed again this month. In a meeting between ...

Responding to the opposition leader, Minister for Defence Pervaiz Khattak said the Khyber Pakhtunkhwa government had passed a conflict interest of law while no such law was ever passed in the provincial assembly of Punjab. He said the PTI cabinet members were avoiding conflict of interest.

'Why will you go to the NAB chairman?'

Taking part in the debate, Pakistan Peoples Party co-chairman Asif Ali Zardari said every minister and adviser took oath that he would not indulge in business.

He highlighted that the value of dollar against the rupee was increasing.

“We have to strengthen the parliament and democracy in the country,” he said adding friends of Pakistan wanted that it should succeed because of which they were extending financial support.

Zardari said his family was facing a Joint Investigation Agency (JIT), adding the parliament should ask from the National Accountability Bureau (NAB) about the cases it was pursuing against the parliamentarians.

The former president said the time has come for the parliament to call the NAB chairman and "proclaim a law" that before any parliamentarian is summoned by NAB, their case should come to the house committee on law so it can decide whether there is actually a case against the said lawmaker or their family.

"Why will you go to the NAB chairman?" he asked the MNAs present, before declaring: "The NAB chairman should appear in person before the parliament."

Zardari said the matter was not personal to him because he had encountered "many NABs" during his career and "will continue to face them".

"The real issue is, what will happen when you are summoned [by the accountability watchdog]?" he said with a meaningful smile, addressing the treasury benches.