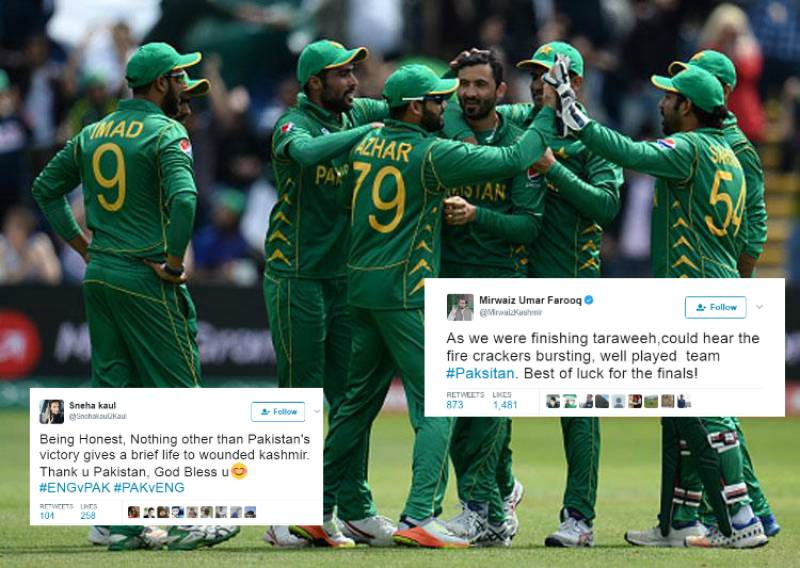 SRINAGAR - Defying the brutal occupation, jubilant Kashmiris of occupied Kashmir took to the streets to cheer the victory of Pakistan - a country they call their own - over England in a cricket match on Thursday.

Just a day after Kashmir's streets went ablaze with firecrackers for the celebrations for Pakistani cricket team who won the match against Sri Lanka, the defiant valley came out even more audaciously this time.

Pakistan on Thursday won the Champions Trophy match against England at Cardiff scoring a place in the finals.

The residents of the valley shared their experience on Twitter:

Kashmiri separatist leader, Mirwaiz Umar Farooq also took to Twitter and confirmed the reports of celebrations in the restive valley.

As we were finishing taraweeh,could hear the fire crackers bursting, well played team #Paksitan. Best of luck for the finals!

On Tuesday, dozens of people were injured after Indian troops barged into their houses and ruthlessly beat them in Shopian district over celebrating Pakistan's win against Sri Lanka in the ongoing Champions Trophy in England.

According to Kashmir Media Service, Indian troops rushed to the Vehil and Turkwangam areas of the district, smashed windowpanes and beat the inmates. The troops also ransacked shops and vandalized vehicles. This brutal action of Indian troops led to massive protests in Shopian.  The protesters raised high-pitched anti-India and pro-freedom slogans.