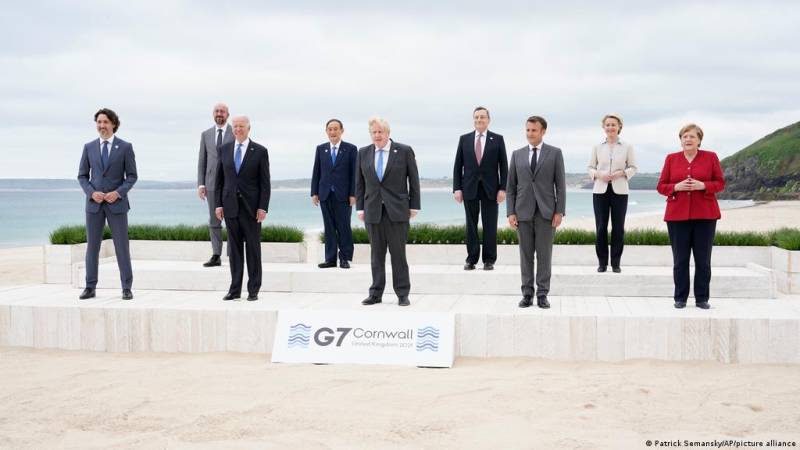 As part of efforts to compete with archrival China, G7 leaders have adopted a plan to support lower and middle-income countries in building better infrastructure.

Speaking at the summit of G7 countries, US President Joe Biden said he wanted the US-backed Build Back Better World (B3W) plan to be a higher-quality alternative to a similar Chinese programme.

China's Belt and Road Initiative (BRI) has helped finance trains, roads and ports in many countries. However, it has been criticised for saddling some with debt.

In a statement at their summit in the English county of Cornwall, G7 leaders said they would offer a "values-driven, high-standard and transparent" partnership.

However, details of how the G7 plan will be financed remain unclear. German Chancellor Angela Merkel said the group was not yet at a stage to release financing for its initiative.

The United States has been particularly critical of China's so-called "debt diplomacy".

The G7, seven wealthiest democracies of the world, have also committed to a new plan to stop future pandemics.

The measures include cutting the time needed to develop and licence vaccines and treatments for Covid-19 to under 100 days. The plan will be officially unveiled on Sunday, alongside the final summit communique.

On the other hand, China has accused the G7 of "political manipulation".

In a joint statement at the end of a three-day summit, leaders of the G7 countries urged China to "respect human rights and fundamental freedoms". China's embassy in the UK accused the G7 of "baseless accusations".

The G7 group, made up of Canada, France, Germany, Italy, Japan, the UK and the US, called on China to respect human rights in Xinjiang, a northwestern region that is home to the Uyghurs and other Muslim minorities.

US President Joe Biden said he was "satisfied" with the statement's language on China.

But the Chinese embassy in the UK opposed the mentions of Xinjiang, Hong Kong and Taiwan, which it said distorted the facts and exposed the "sinister intentions of a few countries such as the United States".

BEIJING — China on Monday rubbished the G7 criticism and said gone are the days when ‘small’ groups ...