What is Pakistan Media Development Authority and why is it so controversial? 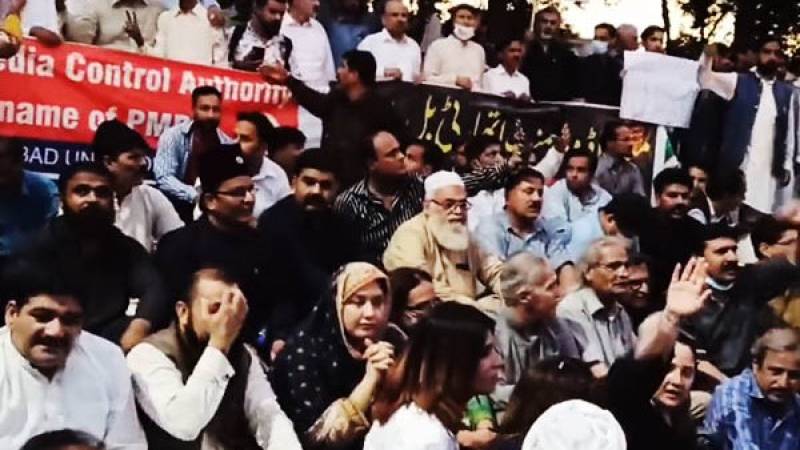 ISLAMABAD — As the row between the government and journalist associations over creation of the Pakistan Media Development Authority (PMDA) intensified, National Assembly Speaker Asad Qaiser came forward on Tuesday to explain why the government banned reporters’ entry into the lower house of the parliament during the joint session on Monday.

Qaiser said the decision to close the press gallery during the joint session of the National Assembly was taken in consultation with the Parliamentary Reporters Association (PRA).

“I couldn't afford a fight between two groups in the Parliament. It could have resulted in disrespect to the House as well as the media,” Qaiser told journalists. "However, there was some misunderstanding."

He said there were reports that there could be a ruckus in the press gallery during the joint sitting of the Parliament, adding that "media people" informed him of a possible commotion during the session.

The speaker said the PRA was a representative and part of the Parliament, therefore, its members should keep its rules and regulations in mind and should not violate the code of conduct in any circumstances. He said that he had met PRA representatives and both sides explained things to each other.

The government has proposed the formation of the Pakistan Media Development Authority (PMDA) in a bid to converge multiple media regulatory bodies in Pakistan and expand the ambit of regulation for digital media.

The PMDA has been conceived as a regulatory body that can “cater to the professional and business requirements of all forms of media and their users”, according to a government proposal. It is meant to replace the current “fractured” regulatory environment and “fragmented” media regulation by multiple bodies.

This means that according to the proposal, the PMDA solely will be responsible for the regulation of print, broadcast and digital media in Pakistan.

WHY ARE JOURNALISTS AGAINST PMDA?

One Regulator For All Media Platforms

The controversial PMDA law proposes to set up all media (print, television, radio, films, social media and digital) control under one body, ignoring the fact that each media format has unique dynamics and characteristics that cannot be governed under one authority.

The Pakistani government says that fake news on social media needs to be addressed and PMDA will do this task. For fake news and hate speech on social media and digital platforms, there are cybercrime and defamation laws, which the government uses when it’s in its own interest.

The government says that owners of media houses are against PMDA because there is a proposal for Media Tribunals (media courts) that will address issues between workers and media houses and protect workers’ rights.

First of all, worker rights tribunals already exist. In addition, there are labour courts and other courses of action for settlement of worker disputes. The Implementation Tribunal for Newspaper Employees (ITNE) exists and so do the NIRC and wage commissioners.

Media tribunals are not meant for workers. The aim is to bypass high courts and create NAB and anti-terrorism like courts to ‘fix’ journalists and pressure media houses to do the same.

No Right Of Appeal With High Courts

The government would like to fast track cases where even the right of appeal doesn’t exist with the High Court, but only the Supreme Court, where there are already huge case backlogs. Media tribunals are the most dangerous part of the PMDA.

The selection procedure for the board governing the PMDA from the private sector includes four stakeholders only when there are at least 12 major stakeholders.

The PMDA board will include 50% government officials and 50% media stakeholders, which is eight in all. How do they plan to get four representatives from at least 12 stakeholders like PBA, APNS, CPNE, AEMEND, PFUJ, cable operators, film producers, digital representatives, and 2-3 different workers bodies?

PMDA also proposes to issue licences to media outlets which already exist for TV and radio.

PMDA proposes penalties on media houses and journalists up to Rs250 million. It proposes increased government control by appointing bureaucrats to key positions.