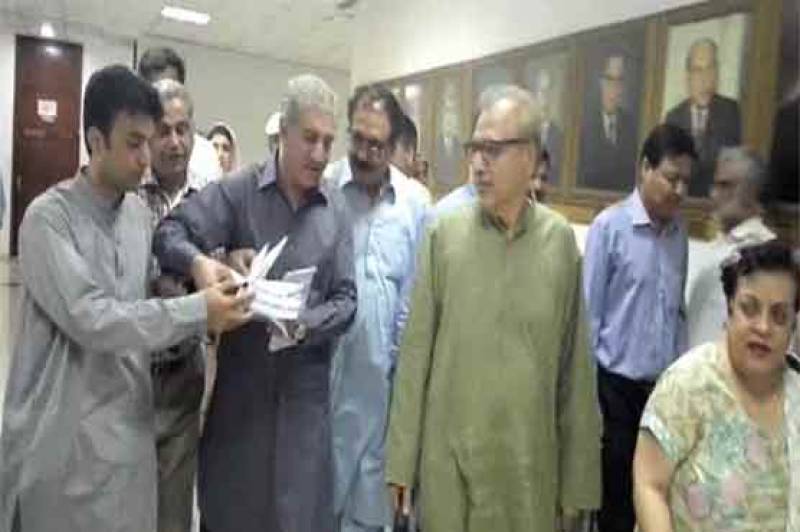 PTI files the reference at the National Assembly (NA) in accordance with Article 62, 63 of the constitution.

PTI members filed a reference for the PM’s disqualification after meeting the Speaker.

It was demanded through the reference that PM Nawaz be disqualified on the basis of Article 62 and 63 of the constitution as the Prime Minister did not disclose details regarding his assets.

The reference filed contained over 200 pages as various evidences, and other documents were attached to it.

While addressing the media outside the Parliament house after filing the reference Shah Mehmood Qureshi thanked NA Speaker for giving his valuable time for the party delegation, but he stated that Ayyaz Sadiq was biased as private media was given access to his chamber when reference against PTI Chairman Imran Khan was filed but media representatives were not allowed to do coverage today.

Qureshi said that PTI or any other Pakistani political party was not behind surfacing the Panama Papers add that the government was not serious regarding the probe of the Panama Leaks issue.

He said that the parliamentary party of PTI gave green signal regarding the filing of the acknowledgment.

He added that negotiations over the Terms of References (TORs) proposed by the Opposition can still be made if the government showed interest.

Qureshi said that the mixing of the party’s core committee shall take place at Bani Gala on Tuesday in which the strategy to be adopted for the future shall be adjudicated.