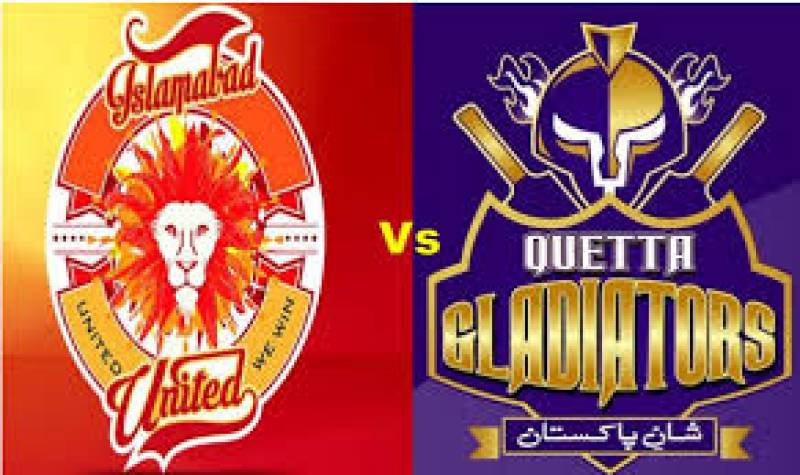 SHARJAH - Islamabad United defeated Quetta Gladiators by 5 wickets in the 7th match of the second edition of Pakistan Super League (PSL) here on Wednesday at the Sharjah Cricket Stadium, Sharjah.

Islamabad United won the toss and opted to bowl against Quetta Gladiators in the first encounter at Sharjah.

Batting first, Quetta Gladiators set a target of 149 runs as Asad Shafiq managed to score 45 runs giving a fine start to Quetta accompanied by Ahmed Shehzad who managed to bag 26 runs. Pietersen got out on the very first delivery apparently disappointing his fans who were looking forward to a massive score through his bat.

Later Mahmudullah and Perera took the crease and scored 29 and 27 runs respectively setting a reasonable target of 149 runs. Quetta lost 6 wickets in its innings.

On the other hand, a star-studded Islamabad United looked in great form and restricted the Quetta Gladiators with Watson and Sami each sending two players to the pavilion.

Islamabad United clinched the target in the last over with Shane Watson scoring a crucial 36 runs and Misbah a mere 10 runs.

Pakistan Cricket Board (PCB) had also suspended the duo from central contract.

Meanwhile, left-handed opener Nasir Jamshed was arrested on Tuesday by Britain’s National Crime Agency (NCA) alongside a bookie. According to the representative of the NCA, both men have been released on bail and asked to report to the agency in April.