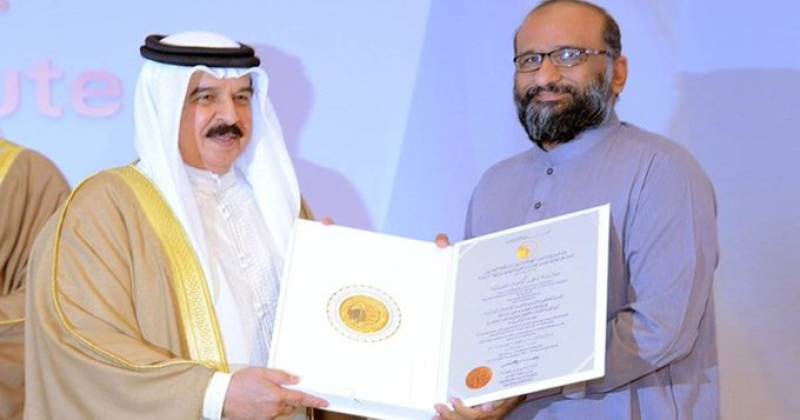 ISLAMABAD – The Edhi Foundation was awarded the Isa Award for its service to humanity at the Isa Center Bahrain on November 12. The award comprises US $one million cash, gold medal and certificate of appreciation.

While speaking at the award ceremony, King Hamad Bin Isa Al-Khalifa said: "We are pleased on this occasion to congratulate the Edhi Foundation of Pakistan on winning the award for its outstanding humanitarian services in the charitable, medical and relief fields. We appreciate the great efforts made by those in charge of the Foundation in furthering its noble message as wished for by its late founder Mr. Edhi, whose name shall remain immortal through his sacrifices and whose contribution shall remain an exceptional model of outstanding humanitarian work." Referring to citation for the award, Deputy Prime Minister Mohammad Bin Mubarak Al-Khalifa stated: "The Abdul Sattar Edhi Foundation is a project which richly deserves the award in appreciation and recognition of its ongoing humanitarian work in all parts of Pakistan."

In his remarks, Faisal Edhi said that the honour would encourage humanitarian actions and initiatives of the Foundation aimed at making the world a better place to live in.

The Isa Award for Service to Humanity was established by King Hamad Bin Isa Al-Khalifa in 2009 in recognition of his father's services to humanity. The award is given to individuals or organizations selected from applicants/nominees across the globe.

An international jury, comprising members from almost all continents, selects the most suitable nominee after two years of research and deliberations.

Conferment of the Isa Award in a ceremony graced by His Majesty King Hamad Bin Isa Al-Khalifa represents another welcome recognition of the tremendous humanitarian work being done by the Edhi Foundation and of the generous support extended to it by the "giving people" of Pakistan.