Sikhs in Khyber-Pakhtunkhwa complain of pressure to convert: sources 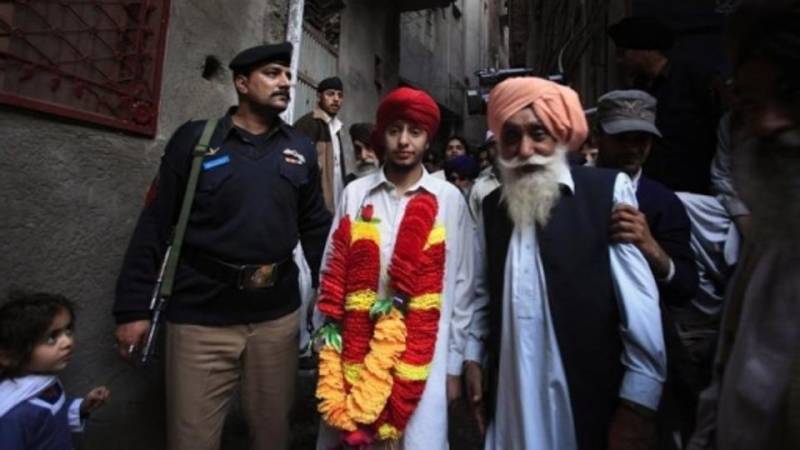 PESHAWAR - A representative of a Sikh body in Khyber-Pakhtunkhwa province has complained that members of the minority are being asked to convert to Islam by officials in the local administration.

A complaint filed by Farid Chand Singh, who represents the Sikh community in Hangu district, alleged that the assistant commissioner of Tall tehsil, Yaqoob Khan, had told members of the Sikh community, who had paid him a visit, to convert to Islam if they wanted their problems solved.

An incensed Singh filed the official complaint against Khan with the district commissioner. Singh told a local newspaper that he had expressed serious concern as some Sikhs were "being forced to convert to Islam" by the government official.

Singh also said in his complaint that the Pashto-speaking Sikh community had been living in Hangu since 1901 and had never offended by anyone, specifically for religious reasons. He said they had always lived peacefully with Muslims.

Despite Hangu having been a hotbed for sectarian conflict, residents of the district had never harmed Sikhs, who were never approached by anyone to convert to Islam, he said. Sikhs have friendly relations with Muslims, who have always stood up for the community in times of need, he added.

“Had it been from someone ordinary, it would have never felt so offending but when you hear such things from a government official, it becomes something really serious,” Singh told the newspaper.

“We the residents of Doaba area are being tortured religiously,” the complaint said.

“The Constitution empowers us to defend our religious beliefs against anyone and we want you to call (the assistant commissioner of) Tall, Yaqoob Khan, and inquire (about) the issue,” it said, adding the issue “should be investigated so that the community could live in Pakistan with love, peace and harmony".

The district commissioner, Shahid Mehood, said members of the Sikh community were offended during their meeting with the assistant commissioner but had never meant to insult them.

"There was no such issue of converting someone forcefully to Islam. Rather, the district administration ensures religious freedom,” Mehmood said.

There is a sizeable Sikh population in parts of Khyber-Pakhtunkhwa province, including the tribal belt bordering Afghanistan. Many of the Sikhs are petty traders and there have been instances of members of the community being kidnapped for ransom in recent years.