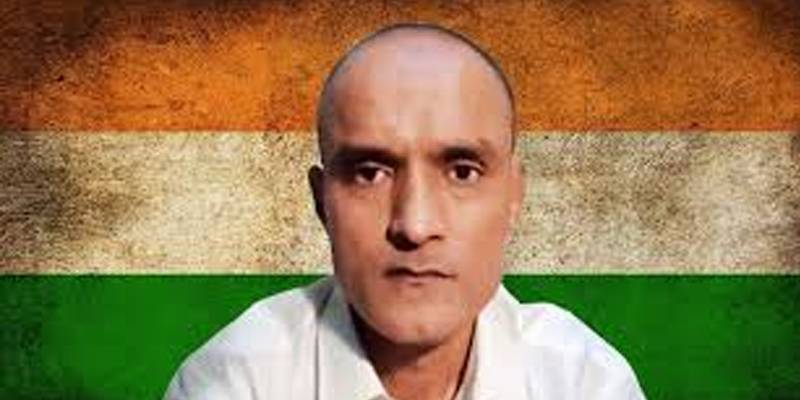 THE HAGUE - The International Court of Justice (ICJ) will commence its public hearings in Indian spy Kulbhushan Jadhav’s case titled (India vs. Pakistan) from Monday, Feb 18 to 21 in which Pakistan side will place its submissions over the case.

On March 3, 2016, Commander Kulbhushan Jadhav, a serving officer of the Indian Navy and an India's Research & Analysis Wing (RAW) spy, was arrested in Balochistan province, having illegally and clandestinely entered Pakistan from the Iranian territory.

The case was moved in ICJ by India against Pakistan under the Vienna Convention on Consular Relations 1963 (Article 36(1) (b)).

According to a press release of ICJ, it has set a timetable for public hearings on the said dates which would be live-streamed.

On February 18, the Indian side will place its arguments first, after which Pakistan will make submissions on February 19. India will submit its reply on the next day followed by closing submissions by Pakistan on Feb 21.

It is expected that the ICJ may deliver its decision on the case during summer 2019.

In accordance with the Rules of Court, all pleadings should be made available on its website after the commencement of the hearing at Feb 18 Feb (10:00 local time).

The legal arguments for the Government of Pakistan will be presented by English Queen's Counsel Khawar Qureshi QC who also drafted the written pleadings.

Pakistan delegation will be led by Attorney General for Pakistan Anwar Mansoor Khan. On the Indian side, the arguments would be presented by Harish Salve.

In his confession, (confirmed before a Magistrate), Commander Jadhav's admitted that he was a serving officer of the Indian Navy, and was operating for India's Research & Analysis Wing ("RAW").

He confessed that he had been involved in crimes of espionage and terrorism directed towards the infrastructure and people of Pakistan, including the Gwadar port and various other facilities in the prominent China-Pakistan Economic Corridor (CPEC).

Pakistan had effectively rejected all assertions of the Indian side by pointing out to evidence obtained from commander Jadhav after his arrest and during the criminal process leading to his conviction as amply demonstrating his activities in fomenting terrorism and engaging in espionage within Pakistan.

Pakistan maintained that it would be incompatible with international law for someone sent as a spy/terrorist by a State to be afforded access to officials of that State, as India had asserted.

Pakistan also pointed to an express Agreement on Consular Access dated 21 May 2008 between India and Pakistan, which allowed each State to consider a request for consular access "on its merits" in a case involving national security.

Furthermore, Pakistan pointed to the uncontradicted evidence that commander Jadhav was provided with an authentic Indian passport in a 'cover' Muslim name, as a clear and obvious link between his conduct and the Government of India.

Such conduct is a blatant violation of international law should bar any claim for relief from a court. India refused to reply on this issue and (unconvincingly) described it as "mischievous propaganda".

In addition, Pakistan pointed to the fact that, in all of the ICJ's previous decisions concerning Article 36 of the Vienna Convention on Consular Relations 1963 (which involved death sentences imposed by the USA), the Court made it clear that it was not a court of criminal appeal and the presence of "effective" "review and reconsideration" by domestic courts was an appropriate remedy, even if a breach of the right to consular access had been established.

The High Court and Supreme Court of Pakistan provided such review, as confirmed by leading UK- based military law experts.

The case involved six key points which India should answer. These included; India had claimed that Commander Jadhav was an innocent Indian national who was kidnapped from Iran, but it had failed to make good this allegation despite repeated requests to provide evidence in this regard.

India failed to substantiate how/when Jadhav was retired from the Indian Navy at the age of 47 years only when he was arrested.

India refused to explain how Commander Jadhav was in possession of an authentic Indian passport issued in a false 'cover' Muslim name 'Hussein Mubarak Patel' which he had used at least 17 times to enter/exit India.

India was questioned on different occasions (even by senior Indian journalists such as Praveen Swami and Karan Thapar) but its stance ended on the mere words "irrelevant" or "mischievous propaganda".

India eventually said the passport was "clearly a forgery" but refused to explain this statement, or why a highly credible independent UK expert was wrong when he said that it was an authentic Indian passport issued by the Indian authorities.

India demanded that the ICJ ordered the "return" of Commander Jadhav to India, but the ICJ had repeatedly maintained that it was not a criminal court of appeal.

It had always so far made it clear in all its decisions, even if consular access was denied, the proper order was for there to be effective review and reconsideration by the local Courts.

It is strange as to why India was asking for an order for "return" in the face of the ICJ's decision and the independent expert evidence confirming that Pakistan has effective review and reconsideration process before the High Court and Supreme Court.

India had failed to explain why the Agreement on Consular Access between India and Pakistan dated 21 May 2008 (which India drafted), and which provided (at Article (vi)) for either State to be entitled to consider a request for consular access "on its merits" where it involved a person implicated in the national security matters, did not apply in this case.

India failed to explain why highly respected UK based military law experts were wrong when they said that Pakistan's High Court and Supreme Court provided an effective review and reconsideration of the military court process.

Pakistan had sent a letter making specific requests of India to assist in the investigation of Commander Jadhav on 23 January 2017 attaching copies of his authentic Indian passport issued in the name of 'Hussein Mubarak Patel', as well as the FIR and other material relating to the investigation into his activities.

India did not provide any assistance at all nor any evidence (either inculpatory or exculpatory) of Jadhav.

Commander Jadhav was provided with legal representation, and after several hearings, he was tried and convicted by a Military Court in Pakistan, which passed the death sentence on 10 April 2017.

Pakistan's legal system, including its Constitution, provided for the availability of clemency petitions as of right to the Chief of Army Staff and then to the President of Pakistan.

In addition, judicial review by Pakistan's High Court and Supreme Court of the Military Court process and judgment was available pursuant to Article 199 of the Constitution of Pakistan.

Pakistan's Courts had frequently stayed sentences imposed by the Military Court at the request of the convict or his family but no application of this nature had ever been made to the Pakistani Courts by Jadhav or his family.

India argued that Kulbhushan Jadhav was an innocent businessman who was kidnapped from Iran, brought to Pakistan, and tortured to confess that he was a Commander in the Indian Navy working with India's Research & Analysis Wing (RAW).

India had argued that the trial and conviction of Commander Jadhav for espionage and terrorism offences was "a farce".

India contended that the denial of consular access required the ICJ to "at least" order the acquittal, release and return to India of Commander Jadhav.