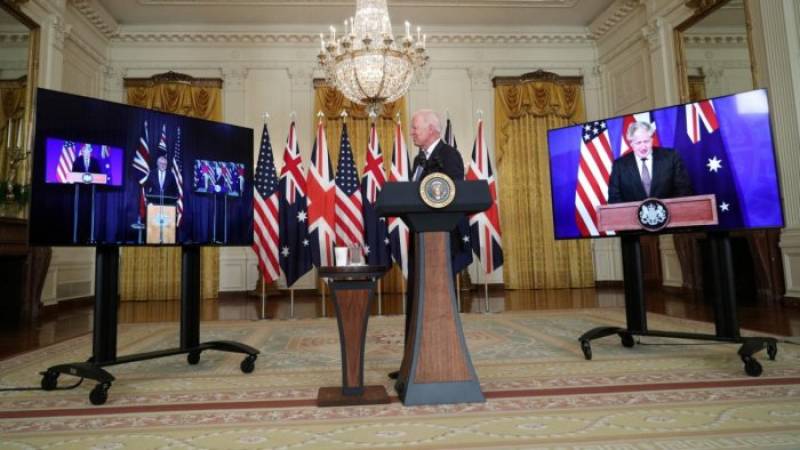 The United Kingdom, United States and Australia have announced a security pact in the Asia-Pacific in an effort to counter China.

The security pact will allow Australia to build nuclear-powered submarines for the first time, using technology provided by the United States.

Analysts say the pact, which will also cover AI and other technologies, is one of the countries' biggest defence partnerships in decades.

China has condemned the agreement as "extremely irresponsible".

China's embassy in Washington accused the countries of a "Cold War mentality and ideological prejudice".

The pact also created a row with France, which has now lost a deal with Australia to build 12 submarines.

The new partnership was announced in a joint virtual press conference among US President Joe Biden, UK Prime Minister Boris Johnson and his Australian counterpart Scott Morrison on Wednesday.

And while China was not mentioned directly, the three leaders referred repeatedly to regional security concerns which they said had "grown significantly".

UK Defence Secretary Ben Wallace said China was "embarking on one of the biggest military spends in history".

"It is growing its navy [and] air force at a huge rate. Obviously it is engaged in some disputed areas," he said. "Our partners in those regions want to be able to stand their own ground."

In recent years, Beijing has been accused of raising tensions in disputed territories such as the South China Sea.

On Thursday, UK Prime Minister Boris Johnson said the pact would "preserve security and stability around the world" and generate "hundreds of high-skilled jobs". He also said the relationship with France was "rock solid".

India has however chosen not to officially respond to the proclamation of the new security alliance. In New Delhi, there is no official reaction. “I do not have anything to share on this at this moment,” external affairs ministry spokesperson Arindam Bagchi told reporters in answer to queries at the weekly media briefing on Thursday.