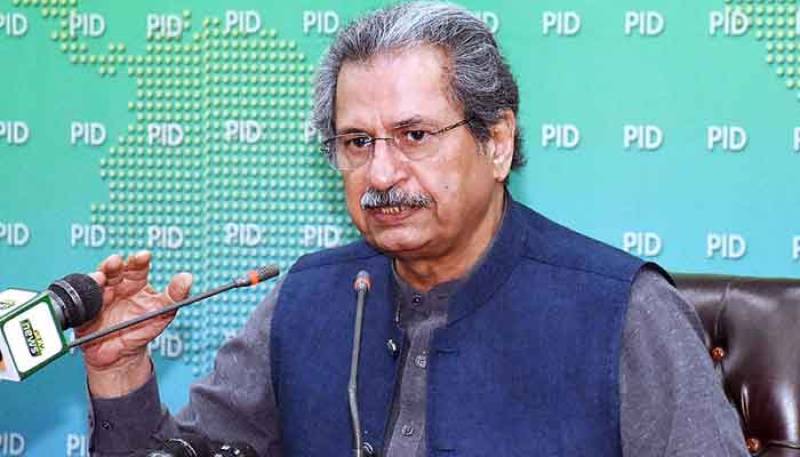 ISLAMABAD: Federal Minister for Education Shafqat Mahmood has said the government’s efforts regarding the grading of recently declared Cambridge International results for O' and A' Levels have borne fruits.

The minister said, "indeed great news for us. Our tireless effort has been successful,” he announced on social media after an outcry from Pakistani students who felt they were unfairly graded.

Cambridge has maintained A-level and GCSE results decided by a computer algorithm in England will be scrapped and replaced with teachers’ predicted grades following a major and humiliating climbdown by the government.

The news follows a furious backlash from students, teachers and parents over computer modelling used by Ofqual. It saw the A-level results of almost 40% of students downgraded, with poorer students disproportionately hit. Students whose grade was higher under the algorithm calculation can keep the higher grade, Ofqual has said.

<blockquote class="twitter-tweet"><p lang="en" dir="ltr">Great news. Our tireless effort has been successful. Cambridge has decided that grades for June 2020 would NOT BE LESS THAN PREFICTED GRADES SENT BY SCHOOLS. PLUS Where a grade issued last week was HIGHER THAN THE PREDICTED GRADE, THE HIGHER GRADE WILL STAND.</p>&mdash; Shafqat Mahmood (@Shafqat_Mahmood) <a href="https://twitter.com/Shafqat_Mahmood/status/1295435626007977985?ref_src=twsrc%5Etfw">August 17, 2020</a></blockquote> <script async src="https://platform.twitter.com/widgets.js" charset="utf-8"></script>

The education minister had on Friday said that as a result of the government’s intervention the Cambridge Assessment International Education (CAIE) has agreed to review its grading procedure regarding the recently declared results.

He added that the Cambridge International will announce its final verdict on the matter after review on Tuesday.

Amidst the coronavirus pandemic, the Cambridge International had canceled its May/June 2020 series worldwide with the announcement to award certificates without exams.

The British government was forced Monday to abandon its policy for grading exams that were canceled because of the coronavirus pandemic after protests by students and warnings that it threatened the career prospects of the most disadvantaged pupils.

England’s exam regulator said it would accept at face value assessments made by teachers in lieu of high school exams, abandoning a moderation process intended to avoid widespread grade inflation.

The publication of A-level results last week sparked outrage when it emerged that 39% of teachers’ assessments had been downgraded under an algorithm based on a school’s past performance.

Pupils took to the streets and threatened legal action, complaining the system made it harder for bright children in disadvantaged areas to do well while rewarding mediocre students in private schools.