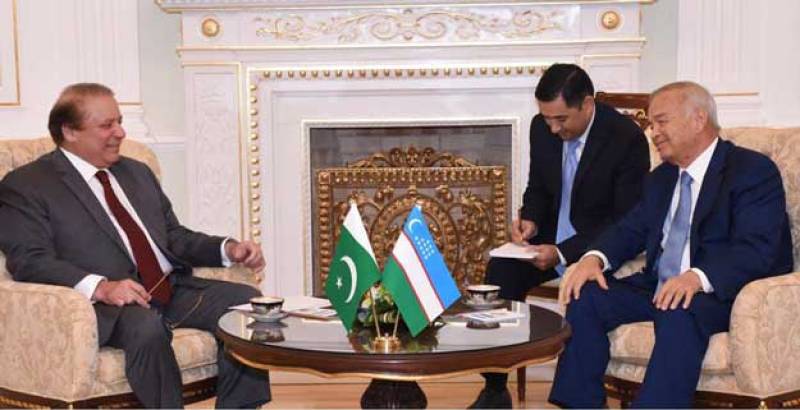 Addressing a joint press conference with Uzbek President Islam Karimov in Tashkent on Tuesday, he said launching of China-Pakistan Economic Corridor, prioritization of building and upgradation of infrastructure connecting Central Asia with our ports will help better integrating the region.

Nawaz Sharif said Pak-Uzbek relations are multifaceted and we are pursuing rail and road connectivity with Central Asia through Afghanistan.

He said Pakistan holds Uzbek leadership in high esteem and we are impressed by the progress Uzbekistan has achieved.

He said Uzbekistan highly value its multi-dimensional relations with Pakistan. He said his country welcome Pakistan's policy of peace and stability and advancing the infrastructure and communications projects.

Both the countries also signed various agreements of cooperation in different sectors.

They also signed a protocol to avoid double taxation.

Foreign Ministers of both the countries signed a protocol to increase bilateral cooperation.

Earlier, on arrival at the presidential palace, a formal welcome ceremony was held in honor of Prime Minister Nawaz Sharif.

He was received at the airport among others by his Uzbek counterpart, Foreign Minister and Governor of Tashkent.

Prime Minister is accompanied by a high level delegation including Special Assistant on Foreign Affairs Tariq Fatemi, Adviser on National Security Nasir Khan Janjua, the special assistant on Aviation and other senior officials.

During his stay in Tashkent, the Prime Minister will hold talks with Uzbek leadership covering all aspects of bilateral relations.