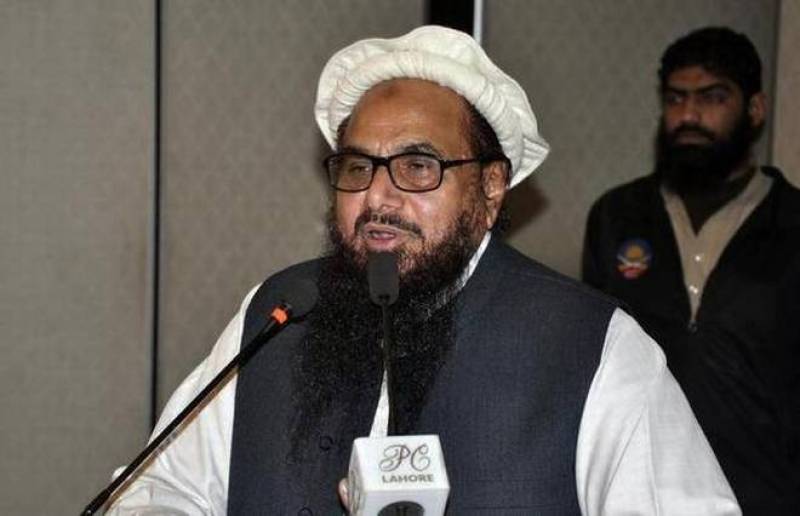 LAHORE - A review board of the Lahore High Court (LHC) on Tuesday granted two days to the Punjab government to file charges against Jamaat-ud-Dawa (JuD) chief Hafiz Saeed and his four aides, who were under house arrest after a crackdown in January last.

Hafiz Saeed, a declared terrorist by the United Nations, the United States and India for his involvement in the 2008 Mumbai attacks, was produced before the review board comprising Justice Yawar Ali, Justice Abus Sami Khan and Justice Aalia Neelum. The proceedings were held in camera.

After hearing the Punjab government home department officials, the board granted two days to file charges.

On Saturday, the authorities withdrew terrorism charges against Saeed and the JuD and kept him under detention under the Maintenance of Public Order (MPO), paving the way for his possible release. Saeed's detention was extended four times since he was detained in the crackdown after the government put the JuD and its charity arm, Falah-e-Insaaniyat Foundation, under sanctions and terror watch list.

Saeed challenged his detention in the High Court in February. His lawyer, A.K Dogar, urged the court to order the release of Saeed and his four aides as no formal charges were filed against his client after so many months of detention. He further challenged the detention, saying Saeed's arrest was due to pressure from the U.S. and he had never been charged with any crime.

Mr. Dogar told the court on Tuesday that the Punjab government had once again extended Saeed's detention for three months.

The Election Commission of Pakistan (ECP) had stalled the JuD's attempt to enter the political mainstream by rejecting the application of Milli Muslim League (MML) party, which was formed to mainstream the JuD.

The interior ministry wrote a letter to the Election Commission that the JuD and its charity wing are under sanctions within the country and internationally, as well.